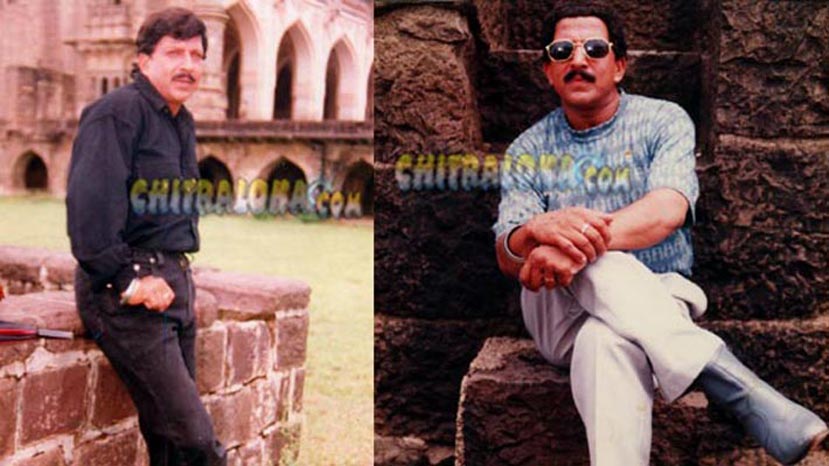 I spoke to the producer of Himapatha, Rockline Venkatesh and informed him that Vishnuvardhan had asked me to come to Bijapur. I reached Bijapur and stayed with the film team in the same hotel. I went along with them to the shooting location at Gol Gumbaz.

Director Rajendra Singh Babu was busy explaining the scene to the leading ladies, Suhasini and Jayapradha. Even at that early morning hour, a large number of local people started assembling there. Vishnuvardhan came to the location in a while. The crowd started cheering him. Vishnu had a small hair cut and was looking different. When he saw me, he smiled and said, "So you have come here also!"

Singh Babu worked without a pause. He was shooting continuously and there was not a minute spared when I could have taken photos of all actors together. During the break I apporaced Vishnuvardhan and he stood for the photos. I clicked solo photos of him and requested Suhasini and Jayapradha to join for the photo shoot. They obliged. I requested Vishnu sir for a change of costume and he asked me to wait a bit. After the break when Singh Babu was shooting the scenes with Jayapradha, Vishnuvardhan changed his costume and stood for one more round of photo shoot. I had clicked nearly four reels.

The people at Bijapur were amazing. It looked like all the people had left behind their jobs and assembled near the shooting to see their favorite actor. Whenever there was a chance, Vishnuvardhan would go near the crowd and was wave towards them. The crowd always responded with cheering and shouting his name.

In the evening after the shooting and when the team began readying to go to the hotel, Vishnuvardhan asked me to stay back. I told him I had to return that night itself since Mysore Harish wanted the photos for the cover page. Vishnu just smiled. Four cars left the shooting spot together and I did not know which car Vishnuvardhan had occupied. When I asked about this, Rockline Venkatesh "All cars will go together for some distance and after that they will split and go in different directions. The car with Vishnu sir will go in a different route and reach his hotel which is a secret!" All this measure was taken to avoid the crowd going to his hotel!

I returned to Bangalore and got the photos printed and gave it to Mysore Harish. It was printed in Star Magazine. Within a span of four days, I had done two photo shoots of Vishnuvardhan.

Vishnuvardhan - The Memories of a Legend - 1‪