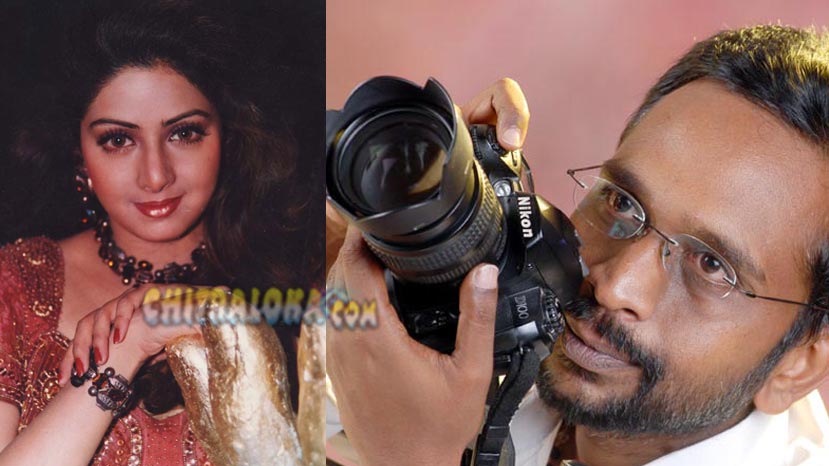 Actress Sridevi who shot to fame in Telugu and Tamil industries and later ruled Bollywood film industry had an heart attack and expired earlier today in Dubai.

Being a photo journalist in Bengaluru, I had the opportunity to click her photos only once. In 1995 Sridevi and Anil Kapoor were shooting for a Bollywood film in Bengaluru's Abhiman Studio. I got this information and went straight to Abhiman studio. It was a break time and Sridevi was sitting with Anil Kapoor. I approached her and requested that I need some pics of her for magazines. She told me to come the next day.

I returned the next day with my camera. She had not expected that I would return on the time she had told. She said let’s take photos after the film shot. That shot took nearly two hours. After that she called me and said that she will pose for only two clicks. I agreed and we went inside the shooting sets and I selected a place where the lighting was good and she stood there posing. I managed to click 5-6 snaps within seconds.

My friend Srinivasan who runs the monthly magazine Hamsa Raaga was a big fan of Sridevi. I used to provide cover photos for that magazine. Whenever we used to meet he would always talk about Sridevi. Such was his devotion to her. After clicking photos of Sridevi I got some of the photos printed and took it to him. I was eager to see his reaction. I showed him all the the photos I had taken along except photos of Sridevi which I had kept in a separate cover. He has selected all the pics and I asked him how much he will pay if I gave him one extraordinary photo.  For every cover page photo, he used pay me Rs. 150. He said he would pay whatever I asked for the "extraordinary" photo. Slowly I opened the cover containing photos of Sridevi and once he saw that they were the photos of his favourite star Sridevi he was shocked and jumped from his seat. He was ready to pay me Rs 1,000 but I took the same amount what he used to pay me for the other photos. Once the HamsaRaga issue came out with Sridevi's cover page it was a big hit and literally sold like hot cakes, revealed Srinivasan. Later I had given the same photo to many other magazines and all were superhit. Later I had given Sridevi photos to many magazines which got published in their Cover pages.

Crazy star Ravichandran was also a fan of Sridevi. He wanted to cast her in one of his films but he was not able to obtain her shooting dates. Ravichandran was regularly trying to cast her and for a particular movie Sridevi had agreed to act in the Kannada movie. But the remuneration demanded by her resulted in the pan being dropped. The amount she had asked was Rs 50 lakhs. During those days many movies would have completed their entire shooting with that amount.