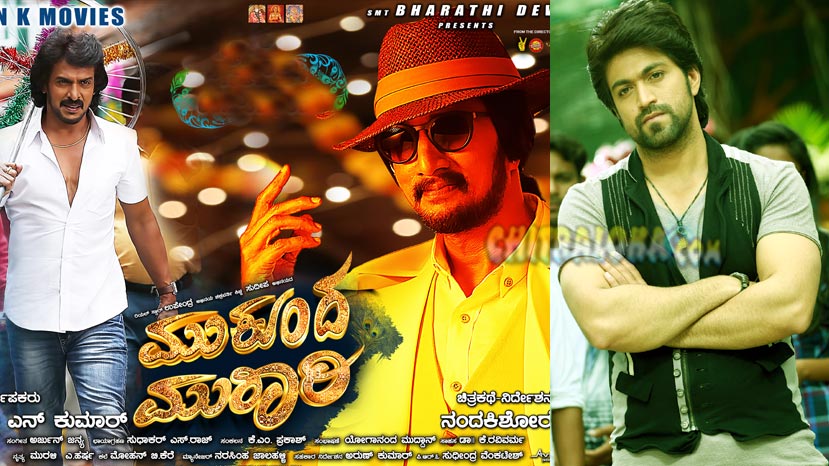 The upcoming clash of the biggies at the Sandalwood box office on October 28 has made everyone sit up and take notice. The multistarrer Mukunda Murari starring Upendra and Sudeep is heading for a straight clash with Santu Straight Forward, starring the real-life pair of Yash and Radhika Pandit. Though this is not the first time that such a clash of big films is happening in the Kannada film industry, this current clash could be a game changer for many reasons.

Chitraloka gives you a breakdown of what can go right and what could go wrong. It is a common refrain that the Kannada film industry is small compared to the neighbouring industries and should be cautious about investing too much. But today the films of top stars has a minimum budget of Rs 15 crores. Usually it is Rs 20 crore. The next level of stars too are not far behind. The budget of films of these second line of stars cost Rs 10 crore each.

Whenever films of such top stars release other producers and distributors keep away from releasing their small budget films in the same week. Each and every star film is anxiously waited by the film industry as it can make or break not only the particular producer but the business of many distributors, exhibitors and others are dependent on them. If a big budget film fails at the box office, it will affect the entire industry to some extent. For example, the distributors would then think twice about buying the next big budget film.

So producers and exhibitors take extra care and see that two movies of big stars do not clash on the same day. This is because even if one fails, the industry will be affected. But they are not successful all the time. There have been many instances of two star films releasing on the same day or a day apart. This has happened for many decades.

In 2012, on November 23rd Yash-starrer Drama and Auditya’s  Edegarike released on the same day. In 2014 Duniya Vijay’s Simhadri released on 2nd October and Dhruva Sarja’s Bahaddur was released on 3rd October. In 2015, the 1st of January saw Ganesh acted Khushi Khushiyagi release and on 2nd, Upendra acted Shivam released. In the same year on August 14th Ganesh and Upendra’s movies clashed again with Buguri and Uppi 2 releasing on the same day.

But this clash on October 28, 2016 will be different and change the way Sandalwood thinks and works. Check Part 2 of this series for the analysis.