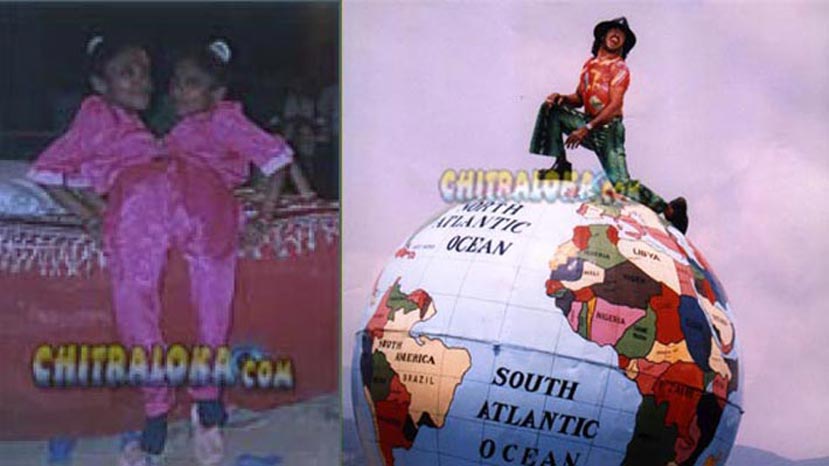 The GANGA-JAMUNA Siamese twins living in Keshbpur, near Calcutta, West Bengal is two headed, three legged born joined at the waist are a rare phenomenon. Ganga Jamuna -share two kidneys, two hearts, one liver, one uterus, a common vaginal passage and two legs. A third leg is a withered tail like.

They (Only Siamese Twins living in the world at present) are married and leading a comfortable life. They appear in a key juncture in controversial Kannada film ‘H2o’ throwing the audience in a state of pathetic mood.

One of the two directors of ‘H20’ after knowing the details in India Today magazine went in search of Ganga-Jamuna along with Mr.Hanumanth ("Super Star" Film Producer) after discussing with Mr.Dhanraj, H2o Producer. We spoke to one of their brother's and came to know that they were at Bikaner, Rajasthan participating in one the Melas. He also told us that they are the only bread earners for a very big family consisting of Parents, 3 brother, 3 sisters & they were the eldest among all the brothers & sisters. In the beginning days Ganga Jamuna used to earn 19 paise and it shot up to Rs.2 later on. Now their pay packet per day is very good.

The first Siamese was born in 1811 in Chinese family and they were named as Chang and Eng. What is rare about Ganga and Jamuna is the survival so far for 35 summers. They are as human as the woman next door. They share a common sexual urge it is learnt. They are married to Gadadhar. The Siamese twins conceived and delivered a baby girl. Sadly it died a few hours after birth.

Recalling how Ganga Jamuna came to act in H2o, one of the director Rajaram says `In the year 1998 when we were finalizing the climax for Dr.Rajkumar's film titled "KANNADIGA" which never went on floors, I suggested about these Siamese twins to Mr. Upendra who had penned the story-screenplay. He was interested in it and immediately adopted it as the climax scene.

Unfortunately, the film was not produced because Dr.Rajkumar had got knee cap problem and could not act. Then, I was totally disappointed. Then in the year 2000 when we started this film H2o, I again got the idea to bring them to this film. Producer Dhanaraj also encouraged us. Then we went in search of them.

When we first met Ganga- Jamuna we could not believe our eyes. They were real and normal as any other human being. They greeted us and we introduced ourselves to them, they were very happy that somebody had come in search of them from such a long distance. Finally, we expressed the reason for meeting. Ganga and Jamuna did not believe that they are going to act with Mr.Prabhudeva, Ms.Priyanka Trivedi (not mentioning Mr.Upendra because they had not seen any films of Mr.Upendra). At first, they did not agree for acting, then with a great difficulty we made them to accept to act after waiting for 3 months. They came all the way down to Bangalore for 2 days for shooting & left happily with a lot of dreams. They were brought in a special Tata Sumo vehicle making a bed comfortable to travel.

Ganga-Jamuna had called prior to the release of ‘H2o’ on cell phone for their best wishes for the film & also expressed their eagerness to watch the film. I promised them that shortly they will be procurred to Bangalore for viewing the film. I am trying to bring them once again to Bangalore & show them their film, then to arrange a press meet with regards to them with the help of Mr.Dhanraj, Producer of "H2o".