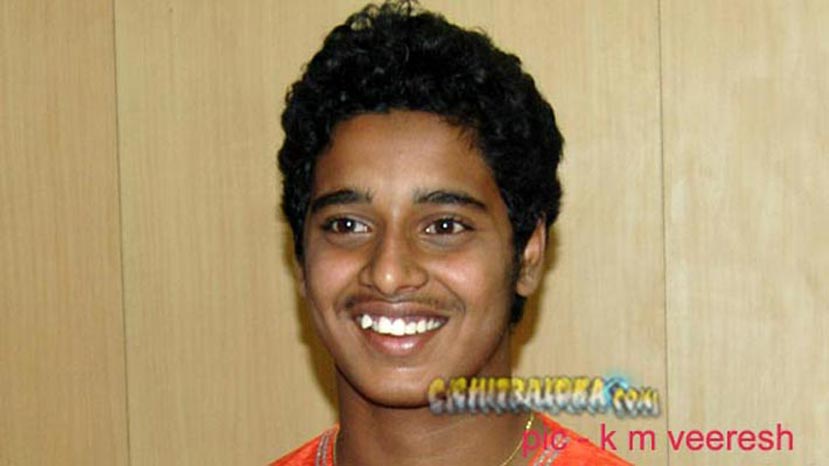 Master Pankaj Kumar V.N. son of eminent director of Kannada cinema S. Narayan is forging ahead with confidence and commitment in his acting career from last three years. The right son for the right father he is. He is now playing a lead role on silver screen from Kannada film ‘Veeru’. Pankaj’s father S.Narayan is directing a different socially relevant film that is poles apart from the films he has directed so far in his 14 years of career. Master Pankaj studying at 8th standard at Bishop Cotton School in Bangalore has acted in small roles in ‘Vishalakshammana Ganda’ and ‘Jamindaara’. Later in his father’s television serials like Parvathi, Durga and now Suryavamsha he is playing important roles without bunking the classes.

‘I have learnt how to face camera and react from my father’. He is my mentor. I have been learning work from my father and concentration in work from my mother. All these days on holidays, Sundays and half a day on Saturday I used to attend the shooting. I never missed out in studies. In 7th standard I secured over 95 percent and now I am keen on studying because the exams are very near for me says Master Pankaj speaking to this correspondent at Malleswaram Club on the day of launch of his ‘Veeru’ Kannada film.

‘I am learning Karate, get up from bed at 5.30 am finish all my work on my own’. I have seen ‘Anniyan’ for five times and learnt how to react to the situation from actor Vikram in that film. My choice is village subject says Master Pankaj.

His twin brother Pawan is interested in becoming a pilot. Surfing the internet in the house he has gathered lot of information on pilot career. His elder sister Vidhya pinning hopes on becoming an IAS officer.

All the best for the good ambitions