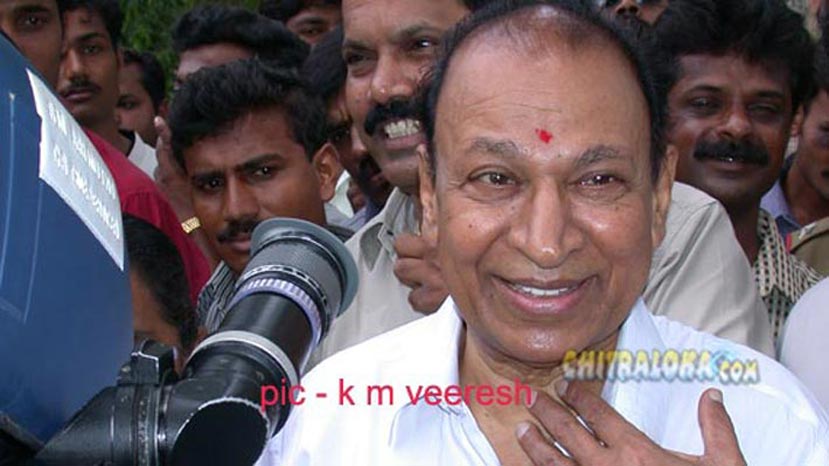 In  the annals of Kannada film history 7th May 1954 and 7th May 2004 (today) are equally important. This is unforgettable even for the icon of Kannada film industry Dr.Rajkumar. It was on this day his debut film ‘Bedara Kannappa’ was released 50 years ago. He was Muthuraj then.

The film Bedara Kannappa completed 100 days of screening at the New Opera theatre in Mysore and the proprietor of the theatre the 90 years old V.T.Raman recalls those days. It was AVM Chettiar the producer who introduced Dr.Rajkumar. The man behind the project of ‘Bedara Kannappa’ was H.L.N.Simha the director of the movie. But when the film was ready there was dearth for distributors. But former chief minister of state S.Nijalingappa relative Gurunath evinced interest through ‘Karnataka Films’ to release the film. The rent was fixed at Rs.2000 per week recalls Raman. We have not taken any other film when the release of this was definite because Kannada is our language. I thought the film ‘Bedara Kannappa’ would run for one or two weeks. But the audience came from all over to Mysore with lunch boxes ready to watch the film. The dialogue delivery and songs were well measured. It ran for 100 days and it is a history now.

HE SAT ON STONE BENCH AND DRANK COFFEE

Recalling Dr.Rajkumar initial days Raman says Dr.Raj sat with his father Singanallur Puttaswamaiah on the release day to watch the film. ‘Bedara Kannappa’ was the first film to release at New Opera theatre. In the small bench at this theatre Dr.Raj drank coffee.

The response this film got was tremendous. As a matter of fact the new era for Kannada films started rolling from this film. It was 90 paisa for balcony, 50 paisa for 2nd class and 25 paisa for front bench. There was no entertainment tax. Perhaps this gesture from the government was helpful for the film industry.

The fear in the mind of 90 years old Raman is that in future all exhibitors shut their doors and make way for shopping complex. He indirectly means running cinema theatre is not a good proposition.

Best wishes from Chitraloka for Dr.Rajkumar on this memorable day May 7th.