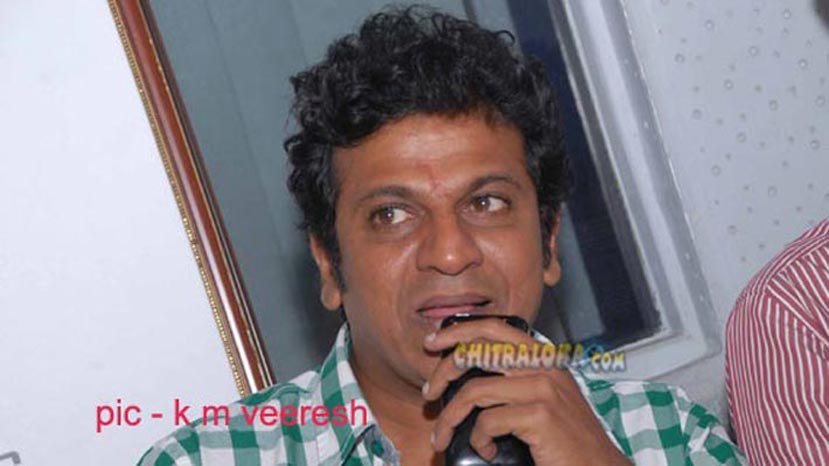 The only hatrick hero of Kannada film history is Superstar Shivrajkumar. The proud son of Dr.Rajkumar – Shivrajkumar is a ‘boy next door’ in his career made him much more popular. From Anand to A.K.47 Shivrajkumar completed 50 films in fifteen years. He has many hits to his credit from the genesis of his film career.

‘Anand’, ‘Rathasapthami’ and ‘Mana Mechchida Hudugi’ in a row completed silver jubilee. Soon after completing B.Sc. in Madras University the first son of Dr.Rajkumar made his debut in Singeetham Srinivas Rao’s directorial venture for the home production of prestigious Dr.Rajkumar banner. ‘Anand’ the debut was a dream come true and set aside the detractors with a blockbuster hit. Trained in Kuchupudi dance from Vempetti Chinni Sathyam in Madras during the college days his flair for western dance such as Jackson, Steve, Wonder and Richie.

A worthy son of a worthy father – Shivrajkumar like all stars had hits and misses in his career. He never lost his cool at the time of failure and his continuous urge to try at novel subjects and roles kept him going. He is a soft-spoken, curly haired , average built exceptional actor who involves not only in his role on the sets but also in others to improvise the film.

With awards from State Government, from the prestigious awards like Cinema Express, Film Fare, Fans Association Shivrajkumar maintained his steady growth. A perfect youth of this genre Shivrajkumar simplicity and thinking ability is a model to the coming generation. He has never moved with

‘head weight’ in his life. He never opted for high class treatment on the sets, never attended to shooting late, not involved himself in any controversy, never given up his support to the youngster. He had enough of success in his career and possesses the guts to dictate terms but never did so because of the cultural and disciplined background Shivrajkumar had in his early life. To recall from one his interviews, Shivrajkumar once said he could have opted for glorious life style in college days, but my father did not brought up like that. He used to send me a very meager pocket money besides providing all facilities. I took this as a lesson and never cursed myself. Such treatment has given the respect for the money earned. I did not become a ‘spoilt brat’. Thanks to my parents, he had said once.

Beginning his career in the family banner Shivrajkumar kept others in tenterhooks as he continuously acted in three films that became super hits. He changed his mind to accept other banners in the early of his career and that has helped the industry to grow with the ‘chip of the old block’ turning successful in action films. The producers queued up for this hatrick hero Shivrajkumar and his cool and easy temperament reversed the temperament others had built.

Today with 50 plus Kannada films, Shivrajkumar maintains the standards set by his father to some extent. He improved from film to film and his dialogue delivery scale of growth is tremendous.

His films like ‘Ohm’, ‘Janumada Jodi’, ‘Nammura Mandara Hoove’, ‘AK 47’ ‘Preethse’ have broken the box office records. His attempt to sing in films and also in albums has been above average hits.

Like the contemporaries in Tamil and Telugu Shivrajkumar has come out from the shadow of his father Dr.Rajkumar a long ago but it is difficult for him to give the varieties that his father has given in 50 year of his career. In social, comic, action films Shivraj proved his mettle and acting ability has come to him through his blood.

Another significant aspect this actor of par excellence has maintained is that he understood his limits and worked around that boundary in the beginning and later stretched it for the good of the industry. Shivrajkumar the son-in-law of former Chief Minister of karnataka never made up his mind to enter his politics. This has further boosted up his public image. Politics is not for me says this actor at his late 30’s.