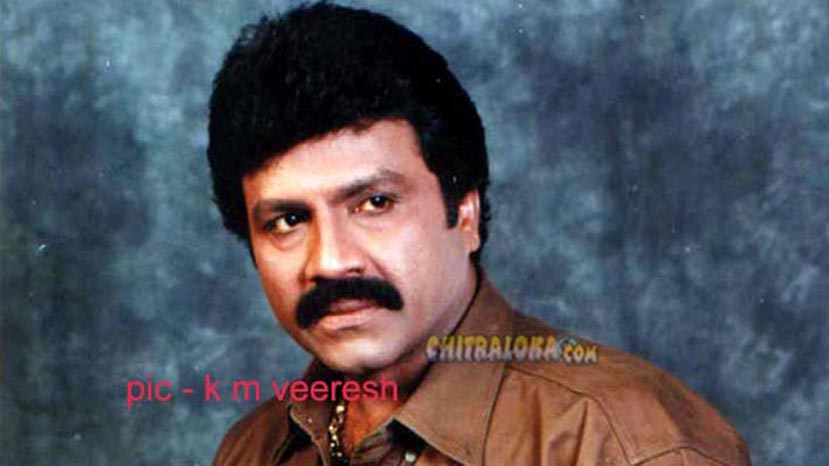 In a decade of existence in the tinsel town B.C.Patil has grown as a towering personality. The diversification he planned perhaps made him a household name today. He has offered variety of films as a producer and as an actor has proved his mettle in hard and soft roles with ability, courage and confidence. 25 films to his credit as an actor and a dozen films as a producer B.C.Patil reached a spot after a careful innings. The guts perhaps had come from his police job of over two decades in various capacities. Looking back at B.C.Patil ten years ago he strikes to us as a villain in his home production ‘Nishkarsha’ a blockbuster directed by Sunilkumar Desai - a thriller starring Vishnuvardhan and Ananthnag. As a rabble rouser Patil struck a gold as an actor cum producer. ‘Nishkarsha’ in 1993 bagged 36 awards at various levels. Soon came a few films starring Patil as villain. By doing sundry roles he rightly gave a thought in transforming himself as a hero. Then came ‘Kaurava’ a film that discovered the softness and ruggedness in Patil. The combination of S.Mahender, Hamsalekha and Patil created magic. ‘Kaurava’ ringed the cash registers as well as established a strong base for Patil. Patil’s punching performance in ‘Karava’ again drew him to inconsequential roles as he had the popularity behind him. It is the tendency of any growing actor. Patil wanted to regularly change his outlook on the screen and so he jumped to become ‘Premachari’. A musical entertainer ‘Premachari’ needed the actor to underplay. People did not like this one from Patil. There was all round demand from Patil on the footsteps of

‘Kaurva’. As it is difficult to repeat the success Patil was not spared. He did Shivappanayaka, Soorya IPS and others but success evaded him. He never keeps idle. Attempts kept pouring in from him and on the other side the industry demanded his presence in at least guest roles. At this time came the sibling of Patil – Ashok from United States of America. That gave birth to ‘Shaapa’ (starring Ramesh, Anu Prabhakar and Patil) a film highly applauded by the media for the brilliance of Ashok Patil for his direction. ‘Shaapa’ gave four awards for B.C.Patil banner but the expected result did not come from box office. Patil junior proved that he has lot of elements in his store.

Patil belongs to the category of ‘Yenaadaru Maduthiru Thamma’. He had to face uphill task with police job and acting as the sincerity and loyalty was at stake. He took a decision to give up his job and applied for Voluntary Retirement. A few months he got his request fulfilled by Karnataka Government. Patil has a rare nature. He quickly folds up his worries and mounts his ideas.

He has ‘Hatturu Odeya’ now. This is set for release now and once again Patil bouncing back to ‘Kaurava’ image in his forthcoming venture ‘Jogula’.

As a personality he is straightforward and unassuming. He has respected the media and the public. He was a daring cop and now a daring film maker of Kannada filmdom. Like how the entire Kannada film industry strives for good stories and novel

thoughts to get back the audience to the theatre in the age of Television Patil is not failing in his attempts. When we talk about daring ventures of Patil the recent audio launch of ‘Sampige’ company deserves full compliments. Upset about the dry spell Patil pierced strongly and did some homework to get to know the ups and down of audio industry. He is now in the avatar as audio company owner.

For Patil the achievements are many to conquer. No doubt that he is yet another dream merchant of Kannada cinema like Ravichandran of a different scale. He is showing exemplary skill and striking right things at the right time. He knows how to maintain steady growth. He knows how to curtail

expenditures. He gets the right impetus through his financiers like Venkat Rao and Gangadhar Gaddi. He is a shrewd in all activities related to film production. Nothing is Dangerappa for him.

For those who would like to venture to make films take a look at Patil career or seek his advice. In this field it is easy to lose money. It is difficult to get your money.

Such is this strong mass media.