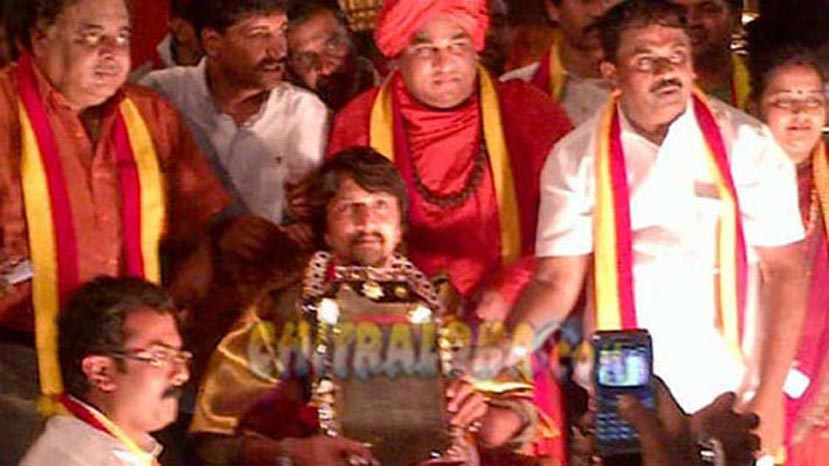 Kannada film industry's prince of performance Kiccha Sudeepa  is now Abhinaya Chakravarthy.  In a function held on Friday evening held at Town Hall, the Culural wing of  Karnataka Rakshana Vedike Sudeep was given the Abhinaya Chakravarthy title in the presence of  a large number of fans.  Rebel Star Ambareesh also made his presence felt in the function to bless his favourite actor who is known to him since his childhood.

After receiving the felicitation,  Kiccha Sudeepa became emotional when he remembered his struggling days as an actor.  "I remember many people who have helped me in my journey in this film industry.  I dont know how to show them gratitude' said Sudeepa. He also said that his parents have been his biggest strength and they have been guding spirits for his growth in the industry.

In the twitter page, Sudeep has thanked the  Rebel Star for making his presence  in the function.

Sudeep thanked his friends, fans and every person in the Kannada film industry for showering so much of  affection on him.  He said he was very happy to receive the award from the cultural wing of the KRV which is trying hard  for getting prominence to the Kannada language and culture.

Tnx to allllllll u out thr..u all r th reason behind ths title 'Abhinaya Chakravarthy'...loadssa luv

Its been a very special n an emotional moment in my life...I'v only wrkd to make a small place in ur hearts n u showered me wth soo mch luv.

Tnx to my producers,directors,coactors,media,writers,lyrists,music dirs,dance n fite mastrs,mkup,costumers,units, n to all my frns n fans.