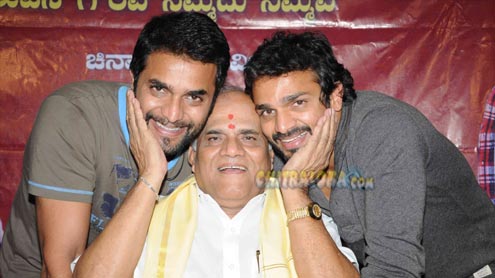 ‘Big Boss’ winner Vijay Raghavendra along with his father S A Chinnegowda and brother Murali on Saturday evening thanked the media for supporting him throughout his career.

Vijay had organised a special press meet to thank each and everybody for supporting him in every phase of his career. Vijay said without the media support he could not have come this far and said all the credit must go to the media people for standing with him throughout.

Meanwhile, Chinnegowda who is also a veteran producer said that two films starring his sons Vijay Raghavendra and Murali would be launched from their home production. Chinnegowda’s last film as a producer was ‘Ganesha Matte Banda’ which had Vijay Raghavendra playing the role of Ganesha and Phani Ramachandra directing the film.