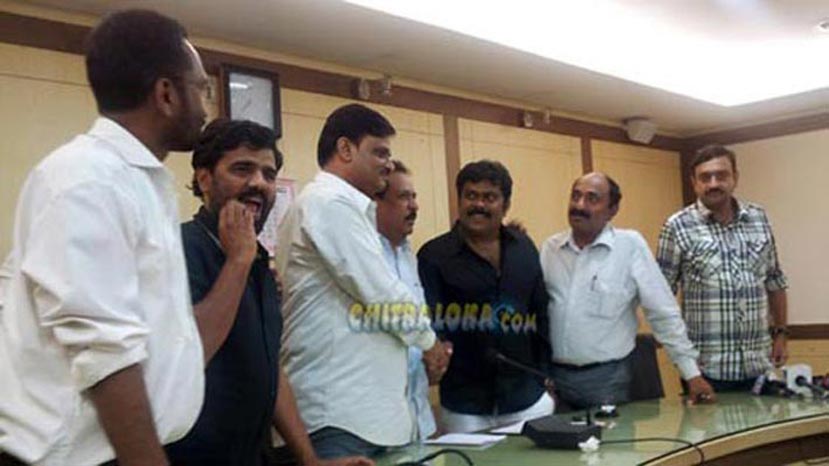 The veterans of the Karnataka Film Chamber of Commerce who had assembled on Friday evening to thrash out a solution to the contentious issue of the early release of Upendra starrers Kataari Veera Sura Sundaraangi have gone for a face saving formula to please both the friendly producers who were on a war path to get a precedence for their respective film's release.    Though the decision may outwardly look a little harsh on producer Munirathna who has got U/A certificate for both the 2 D and 3 D versions of his multi crore project, in reality it is also a testing time for K.Manju to get his film cleared from censors before 8th May.   Nobody knows about the fate of  God Father's  post production work status and the audio of the film is yet to be released.   K.Manju wants  A.R.Rehman to be invited to the audio release function too, but whether it would be possible for the music maestro to attend the function is not known.   If Manju wants to release the film on 11th as promised with all these constraints, it looks like a Herculean task.
KFCC members who had sat for discussion to thrash out a solution have also said that if Manju does not get the film censored by 8th, then he may have to wait for nearly two months or precisely eight weeks  to release his film.  Whether this stricture will be enforceable or not is to be seen in the coming days.   In that way Munirathna may be benefited to a large extent.  That is why he is ready to accept this risky proposition, though it may look as blatantly unfair to some industry personalities.  In that way, Sa. Ra. Govindoo who chaired the consciliatory  meeting has offered an olive branch but at the same time has shown a stick that can effectively control any untoward  competition.