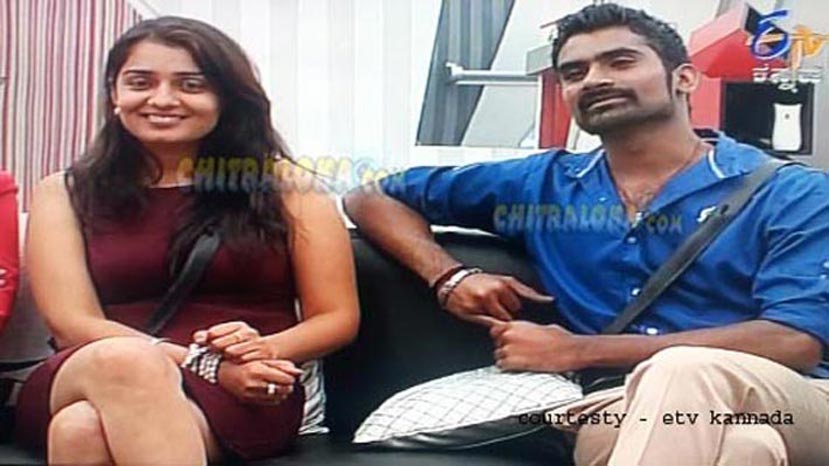 Yogish aka Loose Mada has been literally 'chained,' to Nikita in the Bigg Boss house. As of now, he has been told that he can go out of the house on if Nikita is voted out. Yogish entered the house as a guest. He was to marry one of the two girls in the house as part of a game. He ended up 'marrying' Nikita instead of Anushree. He was to stay in the house for just two days. But in a quick twist to the tale, it was announced that he would stay as long as Nikita stayed in the house. The stay has now extended to beyond two weeks.

This week, there will be no voting out of the Bigg Boss house in which the audience participate. This means that Yogi's stay will continue for at least one more week. And that too depends on Nikita. But in Sandalwood, there is clamor for Yogi. His film, Jinkemari, released even as he was inside the house and he could not participate in the promotion of the film. Now, the makers are feeling the heat. Without Yogi participating in promotion of the film in various channels, they are unable to generate much hype for the film.

Yogi has two other options of coming out of the house. Just like he was brought as a guest, he could be easily let go without Nikitha. Rajesha was also let go of the house after just one day, since he did not make much of an impact. Yogi may himself make the wish of going away citing other commitments. The makers of Jinkemari are hoping for this.

On the other hand, Yogi's presence in the house has boosted the rating of the show. However, many feel that Yogi has been lackluster compared to the other participants. Maybe it is the shock of having to be inside the house for so long which he did not expect. Though he participates in all the tasks, he is not quite as jovial and neither does he talk as much as the others.