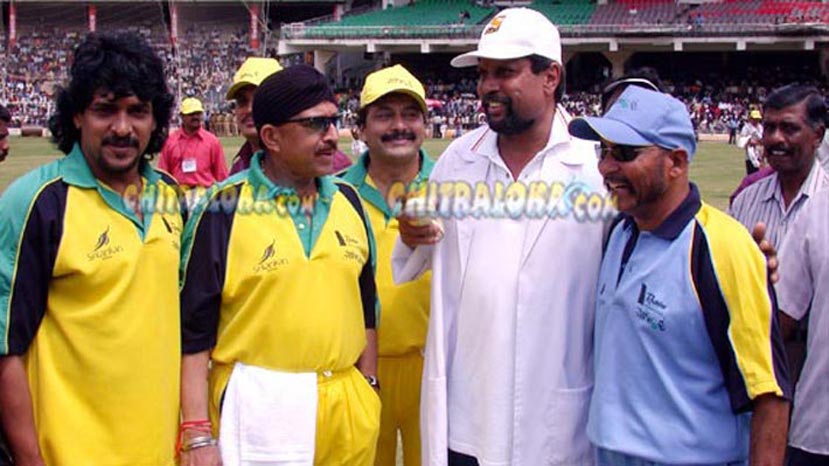 What could have been a fun and frolicking afternoon for the nearly 40000 spectators the rain and delay in start of the match spoiled the atmosphere at the Chinnaswamy Stadium in Bangalore for Nagarahavu cup limited over cricket match between cricket stars and Kannada film stars.

However in the hotchpotch match Vishnuvardhan team lifted the Nagarahavu cup. It was a wonderful co-incidence. The hero of early seventies ‘Nagarahavu’ blockbuster Kannada film (the debutant at that time) Vishnuvardhan himself won this cup was notable. The losing team headed by Arjuna Ranatunge (not Kapil Dev as earlier announced because of his busy engagements to play gully cricket) scored 55 runs in twelve over against Vishnuvardhan team. In the windy and wet playground it was not an easy win for Vishnu and his team.

As earlier announced the match did not begin at 12 Noon. The booing crowd lost patience and started throwing whatever they found from the gallery. Superstar Upendra came and pacified the crowd. All they wanted was the start of the match. Two hours later a simple felicitation was made for Kapil Dev and Bhagawanta S.Chandrasekhar the two former proud bowlers of Indian cricket. As leggie Chandra came near the pitch the superstar Vishnuvardhan hugged him and showed his respect towards the bowler. A Mysore Peta, a shawl and a rose garland were given to Dev and Chandra. Both thanked the Rockline Productions for success in their ventures. Kapil Dev bowled an over from the crease and it was not taken in to account. The stylish batsman of yesteryears Indian team Gundappa R.Vishwanath was absent to receive the felicitation made by Rockline Venkatesh. On behalf of him it was an occation for Sudhakar Rao to get the honour.

The chaos and disruption reached peak when the match got disturbed from rain god after four over bowled by Vishnuvardhan team. The rain that lashed made the center pitch of Chinnaswamy Stadium look like a lake. The crowd lost cool on a brizy afternoon. The mob at this time entered the pitch and there was some trouble.

Prior to this three person received massive blows and they were literally lifted out from the ground. Lack of police made the situation go out of control. It was disgusting to note that the center pitch was left uncovered despite of heavy rains lashing two times after a brief gap. Police never expeceted such heavy crowd would turn up to this match. There strength was somewhere 500 compared to 40,000 odd spectators. Even then the VIP invitees were rushing to the ground. Rockline Venkatesh made them to enter the stadium despite of police protest.

Now some of the highlights of the play:

More than 40,000 spectators turned up for this match. KSCA authorities were stunned to see the respone of the crowd. Even for the real test match this turn out is not expected.

For this biggest reel match, KSCA secretary Brijesh Patel was not there.

One of the two umpires (Sumalatha Ambarish and Bharathi Vishnuvardhana) cooperated the fielding team and stopped the ball moving to the boundary.

Totally three umpires were there for the match. Doddanna Bharathi and Sumalatha. Doddanna was common at both ends assisting other.

Ambarish who hosted a party to Srilankan team at his residence never turned out for this reel match.

Akhila, Anu Prabhakar and Tara were the female players played in this match.

One has to wonder whether Kirmani should be treated as Cricketer or Cini artist. Because Kiri has acted in a film!

Hat trick hero Shivrajkumar opened the bowling and Sainika hero Yogishwar batted first. After he scored one run Roy Dais was out leg before the wicket. When Upendra started bowling Kirmani left four byes behind the wicket.

Raghavendra Rajkumar produced the wicket of C.P.Yogishwar when he gave a snick to the ball. The wicket keeper Kirmani made no mistake this time.

Puneet Rajkumar the young sensation today in Kannada cinema bowled three wide balls but he snatched the wicket of Mohan.

Few minutes after starting the match rain lashed for twenty minutes and brought down the hopes of further play. The uncontrollable mob that entered created stressing moments. Shivrajkumar, Vishnuvardhan and Upendra urged the fans to keep cool and requested for 10 minutes time to resume the play.

When the match began against at 3.15 pm Devraj and Darshan retired to give room for others to play. When Vishnuvardhan started bowling there was calm moment.

When Ramesh Aravind came to batting he was so ignorant that the bails came off when he slightly dashed to the wickets (Hit out). The fielding team declared him out but Ramesh was not ready to accept. Vishnu behaved like G.R. Vishwanath remembered 15 years batck test match at Bombay Test Match aganist England. (Taylor was out. But Vishy called him back to bat knowing that he was not out). He batted for a while later Vishnuvardhan dropped a crucial catch of Ramesh.

The first six of the match came when Arjuna Ranatunga came to bat in place of Akila. He hit one each on mid off and on side. The one effortless six of Ranatunga went up in the air and fell on the vacant chairs next to press box. Ranatunga lifted the captain Vishnuvardhan ball to a six. Seeing his batting strength a spectator remarked `why he retired from international cricket'.

Ranatunga was real cricketer, but now he is a real politicaian. (now MP of Srilanka).

The firework (Deepavali) was expected when the two Deepavali Kannada film stars Vishnuvardhan and Ramesh were with ball and bat respectively. It did not happen. (It was because of Vishnu sportsman sprit earlier)

The talented actress Anu Prabhakar faced the bowling of ace player Roshan Mahanama and she treated it very casually.

Set to score 55 runs the Vishnuvardhan team started batting rather lazily. Thanks to Upendra. He never made a contact with the ball and got out thrice (Hatrick Out!). He argued that he is not out first time and he was given a chance because of producer Rockline Venkatesh. When he got out second time he throwed the bat to the ground and asked the crowd whether he is out in his usual cinematic style. Crowd said No! He again took the bat again. Again he was out successively!. Then he came out from the field voluntarily later making way for others to bat.

When Darshan a good ball to Roshan Mahanama the ball went up to the stand for a cool six.

Ramesh who did not score at bat got the wicket of Raghavendra Rajkumar.

Shivrajkumar made some lovely strokes and scored 14 runs including three successive boudnaries bowled by actress Akhila.

Puneet too batted very well and lifted the score very near to his team victory.

The top wicket keeper of yesteryears the proud player from Karnataka Syed Kirmani made some electrifying strokes on a rainy afternoon. But he was lazily got out in the throw bowling of Anu Prabhakar.

The left arm bowler Avinash notched up the wicket of producer Sa.Ra.Govindu.

The key organizer of the ‘Nagarahavu Cup’ Rockline Venkatesh came to bat like a real cricketer and scored an easy four run.

The rain marred cricket match played at the whims and fancies throwing all cricketing rules came to an end at 5 pm.

Since there was heavy crowd, expecting trouble Nagarahavu tropy was not presented at the ground. Players took a photograph with attractive trophy at dressing room. Now one has to wonder who will keep the winner and runner trophy!