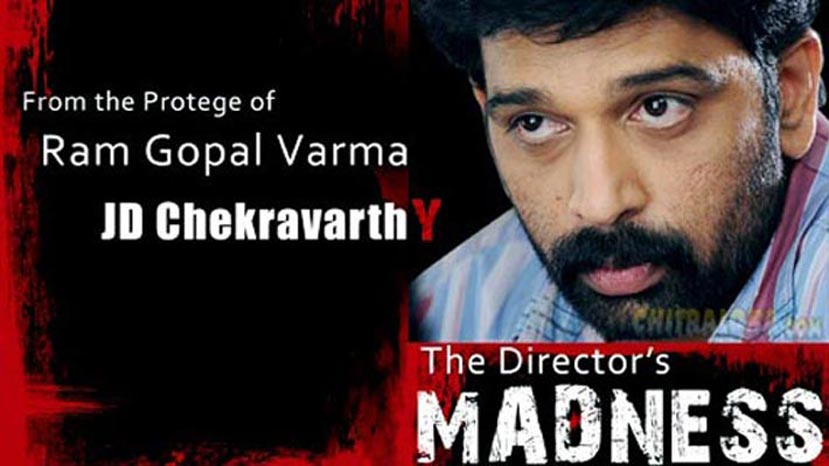 The hunt for the new actors from the protégé of Ramgopal Varma JD Chekravarthy ends on 30th May. So had a little introspective with the intellectual JD Chekravarthy, Here it goes….
On asked what impact he wants to create on kannada audiences?
He answered back saying who am i to newly create an additional impact as there has been great milestones created by technicians and actors who churned and evolved great kannada cinema.
Forget creating any impact, if i can properly copy one quality each from those great Kannada legendry technicians, writers and actors,
I will consider my mission accomplished.
When asked what’s the basic difference between yesteryears’ makers and present generation makers? he quickly reacted saying yesteryears’ makers depended on technique, our present generation makers are depending on technology.
With a sheepish smile and a wink he said There is no technique without technology
Vice versa
No technology without  technique
So culmination of yesteryears’ technique and present generation’s technology can give a good outcome of techno technology for the future generation.
When asked  “why with new comers”?
He replied  “why not with new comers”?
The great legendry icon rajkumar sir or versatile vishnuvardhan sir were also new comers at one point of time.
Lastly what have you learnt from a legendry director Ram Gopal Varma?
Jd chekravarthy said – well whatever good in me is Ram Gopal Varma sir’s contribution,
Whatever bad in me is my own contribution.
He smirked saying this…..
To JD Chekravarthy and the team of Ram Gopal Varma,
We whole heartedly welcome you to the world of Kannada cinema.
Watch out this space for more info about this film.

The talent hunt for Kannada actors has been really enthralling and appealing. The protégé of Ramgopal varma  states that he had signed Nanjunda the seasoned maverick talented kannada writer to work for this film which is Produced By Bangara .G.Sridhar In Association With Chekravarthy Productions.
On asked further JD Chekravarthy said he doesn’t believe in auditions as he himself failed in the auditions test done by his ‘Gravis’ Ramgopal Varma.
As after failing in Auditions, Ramgopal Varma still signed him for both their debut film ‘Shiva’ and went on to make 27 Films with JD Chekravarthy.
So the point of Auditions doesn’t make any sense to him.
Actors should be chosen on Impulse.
JD Chekravarthy feels Karnataka has Epitome of Talent and Dynamics. He wants to Explore both.
According to JD Chekravarthy Qualifications basically required for an actor is Common Sense rather than general knowledge.
Natane Alla Bari Vara, Adhu Krushi Sadhanagala Swayamvara…is what JD Chekravarthy Strongly Believes in….
The Hunt Continues....

Generally There Is A Myth That It’s The Stars Who Makes The Films Work. But It’s The Film Which Makes The Stars Work, Give Them Work And More Work.
We Believe In Making Cinema,
Result Can Be Good, Bad or Ugly.
We Made Lots of Mistakes
And Promise Not To Make The Same Mistakes Again.
But
We May Make New Mistakes!
New Actors Who Are Equally Mad Can Be Part of Our Madness.
Is What Protégé Of Ramgopal Varma, JD Chekravarthy States - As His Hunt Is On, To Find Out Kannada Talent For His  Directorial Debut In Kannada.
Watch This Space. 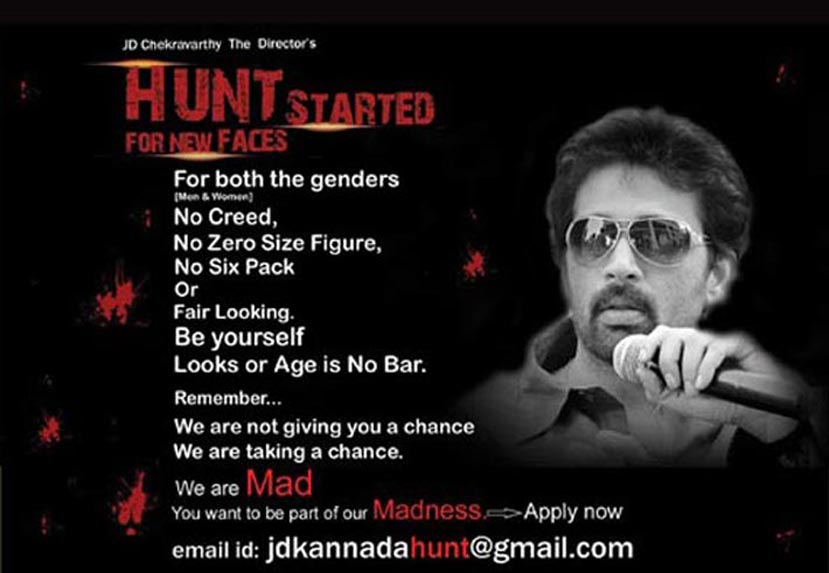 JD Chekravarthy a protege of Ramgopal varma has started hunt for actors to his new Kannada film. For both the genders. No creed, No zero size figure, No six pack or fair looking. Be yourself Looks or Age is no bar.  Remember we are not giving you a chance, But we are taking a chance. We are MAD. You want to be part of our Madness.

email to: This email address is being protected from spambots. You need JavaScript enabled to view it.
That goes the advertisement for the new talent for a Kannada film. The applications should reach before 30th May. Gangapatnam Sridhar is producing this film and it is a Chekravathry production in association with Sri Vignesh Karthik cinema.
Three main lead actors are required. 2 Male and a Female Lead for his first Kannada directorial film and it is a youth centered, stimulating film. JD Chekravathy will be announcing another casting call for character roles.
Well this is an opportunity for new talents to give a try and check their talent.
A brief update on this JD Chekravarthy a top south Indian actor and director – he made debut in 1989 from ‘Siva’ and films like Satya, Vaasthu Shastra, Bhoot in Hindi ranked high. One of his films Darna Zaroori Hai was in the archives of New York Institute of Technology.  In Telugu cinema this sharp actor is known in Money, Gulabi, Anaganaga Ok Roju, Premaku Velaayara, Wife of V Varaprasad, Egire Paavurama, Bombayi Priyudu, Peruleni cinema, Mrugam, Deyyam and many others.

(PS - This is an Advertisement page)