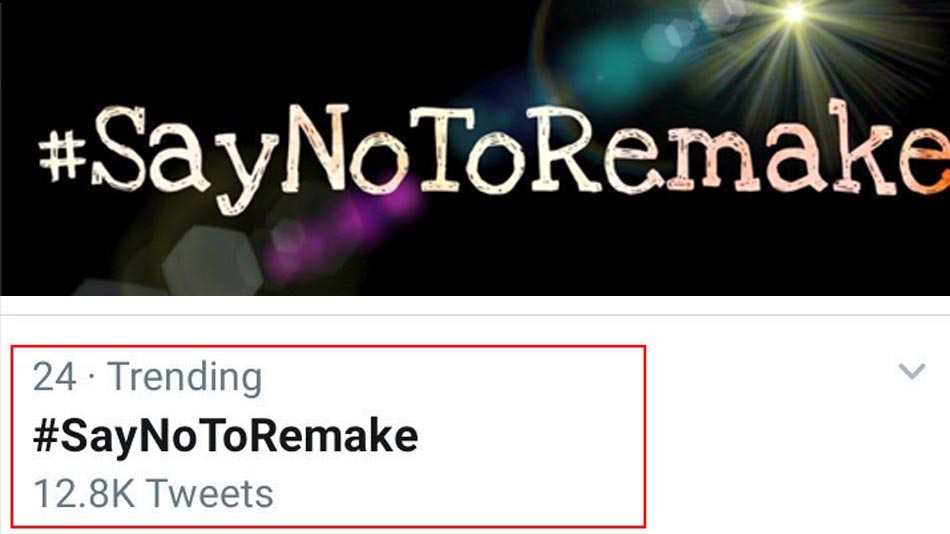 Say No To Remake In Trend

Remake/recreation of classic and popular songs from yesteryear came into existence as a tribute to the works of legendary musicians and evergreen movies. With new sounds added to them by the DJs as 'remixes' started to trend in the Indian film industry, which eventually spread across various industries especially down south including sandalwood!

While a few iconic songs which were recreated became a huge hit with audience loving the new versions and its beats. However, the rapid increase in number of such recreations has led to music lovers expressing displeasure against such remakes, which has started ti trend on various social media platforms from the past few days.

A netizens explains the scenario with an example on why the audience are equally responsible for the present situation. "... not only music companies are responsible for destroying old song but we audience are equally culprit of it. Remake Hindi song 'Aankh Maarey' has 661 M views while the original beautiful song sung by Shreya Ghoshal and Amaal Mallik has just 20M views," netizen writes.

Insofar as the old Kannada songs which have been remixed or re-created or remade has always been a low key affair, but the audience have always appreciated the 'original' composition than the remake ones. Recently, Olage Seridare Gundu song which was remixed for the film Gharshane received thumbs up but the composers as well as Kannada music lovers strive for the original. For example, Thamnam Thamnam song recreated for the film Abhinetri was not that much of a success.

A majority of the film music lovers express that the recreation of old songs spoils the emotion of the old ones. Some even go on to add that if the trend keeps continuing, then the present generation will have no songs to show it to their next generation!

Many of them who were trending with the hashtag #SayNoToRemake, quoted Oscar Award Winning Composer A R Rahman, who recently reacted to the recreation trend, saying that recreation/remakes is nothing but a shortcut to creativity. "When they are doing a movie and they have a release date and don't have anything good enough they say, 'Ok I have plan B' and then do this. That's what happens," the composer reportedly said.

While some good recreations are no doubt enjoyable but original is always the best. Old is always gold, but a fool's gold can never replace the original even when they shine bright 'like a gold'.