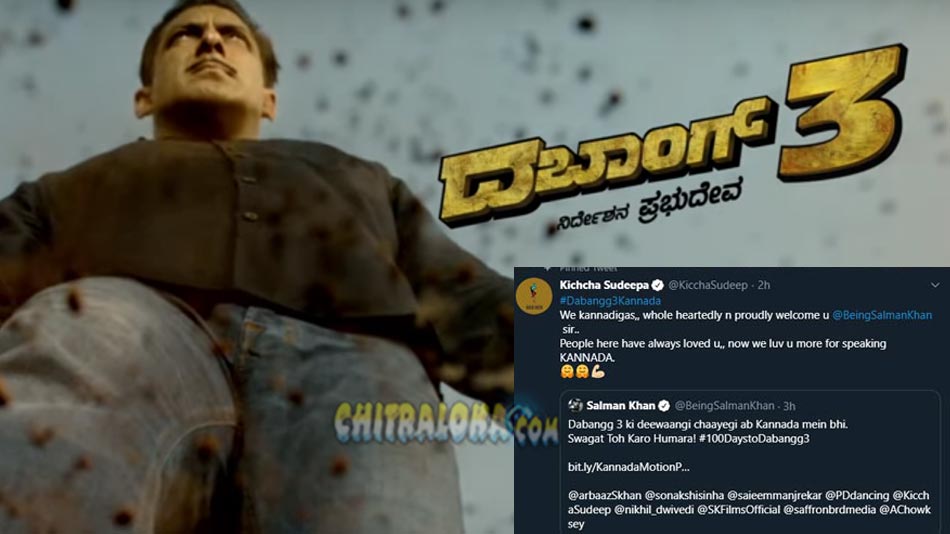 Timeu nandu, tareeku nandu, says none other than Bollywood superstar Salman Khan in his first ever movie in Kannada. Dabangg 3 which is also dubbed in Kannads, is being released in multiple languages from December 20.

The motion poster of the movie which is released in Kannada too, has gone viral among st Kannada lovers especially Abhinaya Chakravarthy and a good friend of Salman Khan, Kichcha Sudeepa, who welcomed him to Kannada.

With 100 days until the release of the movie, Salman Khan has released the motion poster in Kannada with a special message saying 'Dabangg 3 ki diwangi chahegi ab Kannada mein bhi'. Following which, namma Kichcha has welcomed him wholeheartedly and replies that Kannadigas has always loved the star actor and now we love him more for speaking Kannada.

Dabangg 3 which is directed by India's dancing sensation Prabhudeva features Salman Khan, Kichcha Sudeepa and others in the lead. We, at Chitraloka welcome Salman Khan to the rich and glorious Kannada film industry.