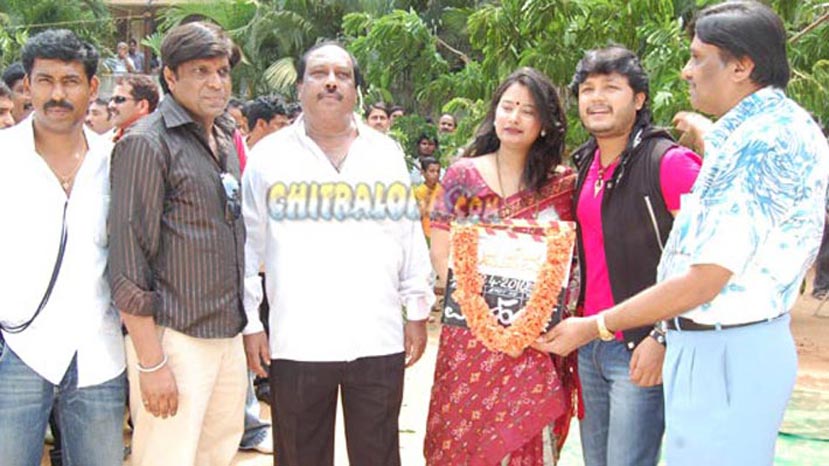 Later addressing a press meet, Rehman said that he had obtained concurrence from Ganesh to make a film several years ago. 'But some how we could not agree about an acceptable story and the project was getting delayed. Thankfully I heard the story written by Sunil Kumar Singh just a few days ago and felt impressed. Ganesh had also heard the story earlier in many versions. He had been clearly impressed with the story. Then everything fell in places and we are able to launch this film. The story of the film starts in a marriage and even ends in a marriage. We are shooting the film for sixty days. Shradhdha Arya is the heroine of this film' said Rehman.

Sunil Kumar Singh said that he had taken a break from directing tele serials for the past two years as he really wanted to direct a film. "I started writing the story of the film two years ago and wrote nearly eighteen versions. And then I had really thought of Ganesh in the protogonist's role in the film. I created the character to suit Ganesh's image. The story was getting improvement with each version and finally I was able to finally convince Ganesh. Then Rehman was also searching for a write story for his film. Rehman was impressed with the story line and he said that I can go ahead with the preparations of selecting the cast and technicians of the film' said Sunil Kumar Singh.

Singh said that he has been inspired by the Epic Ramayana to write the story of this film and most of the shooting of the film will take place in Bangalore. He also added that Tabla Nani, Narasimha and Dr. Nagesh have helped him in tuning the script of the film. "Nani sir has written a separate comedy track of this film. Dr. Nagesh will also be assisting me in direction department' he added.

Dr Nagesh, basically a Dentist had produced a movie Avaran Bit Ivarana Bit Avaryaru long back and has acted in a couple of movies especially with Upendra. For the Upendra new direction movie Symbol Nagesh had worked as a Co-director, but Maduve Mane is first official movie as co-director for Nagesh

Ganesh said that though Rehman had approached him many months ago, the story selection took lot of time. He said that Rehman has given big hits like Yajamana and Huchcha and hoped that this new film will also create records like these two films and like his own film Mungaru Male.

Shekhar Chandru is the cameraman of this film while Manikanth Kadri is the music director of this film. Avinash who was the hero of the recently released film Jugari is playing an important role in the film.