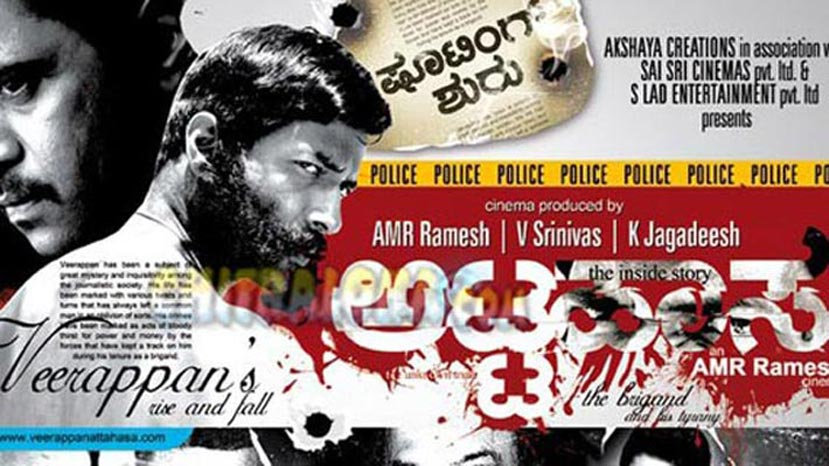 Attahaasa which is made in two languages-Kannada and Tamil- has been censored with U/A and U certificates respectively from Regional Censor Boards from Bengaluru and Chennai.  But the film's release may be delayed further because of the stay obtained by Ms. Muththulakshmi, wife of Sandalwood Brigand Veerappan who says that her husband has been wrongly projected in the film, while Kannada Movie icon Dr. Raj Kumar has been projected with high admiration in the film.

The film stars Arjun Sarja, Kishor in the lead. It is produced and directed by AMR Ramesh whose earlier film "Cyanide' had won many awards.  The film revolved around the exploits of  Veerappan in the forests of three states and his ultimate death in an encounter with the police.

The case which had to be decided on Thursday in Chennai High Court where the petitioner Ms. Muththulakshmi seeking the stay on the release of the film  has been absenting herself from personal appearance in hearings of the case has been further postponed to November 15.

Talking to Chitraloka Mega Portal,  Ramesh said that he is seeking a quick legal remedy, but Ms. Muththulakshmi is deliberately delaying a decision in the case by creating lot of hurdles.   "But I am hopeful that the case will be decided on November 15.  Muththulakshmi had pleaded to spend Deepavali with her children and had said that she had to move out to her native village.  The court has agreed to her request and postponed the case on November 15' said Ramesh.

Ramesh said that he is now planning to release the film on November 30 and he is not worried about any competition from big films in this regard.  "I am confident that my people will be judged on its merit and Kannada film audience would support the film' said Ramesh.