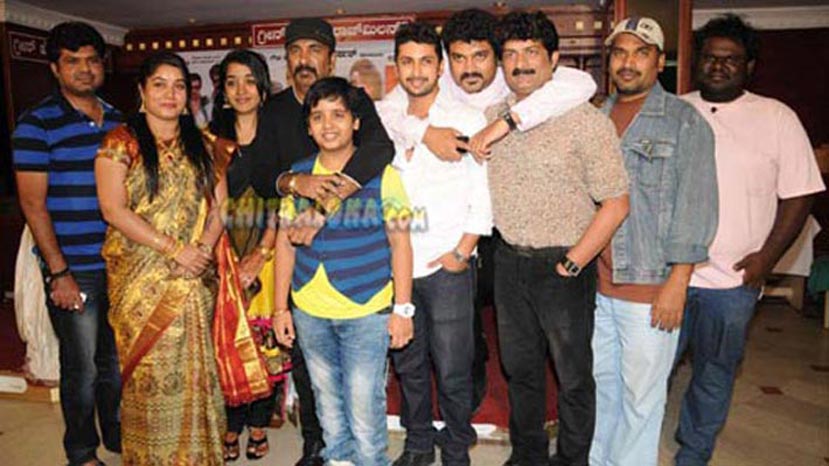 Producers Soundarya Jagadish and Ms. Rekha Jagadish had organised a success meet of the film Snehitharu which has already completed 35 days of its running and is heading for a 50 day run.  All the four leading men Vijaya Raghavendra, Srujan Lokesh, Tarun and Ravishankar Gowda along with the film's director Ram Narayan were present.

However the film's heroine Praneetha and cinematographer M.R.Seenu were conspicuous by their absence.  It looks as if Praneetha may have to explain as to why she is missing out promotional programmes of her own films.

The press meet held on Thursday night turned itself as a celebration event, as the artists and technicians were found in happier moods for working in a successful film.

The script and the large heartedness of producer Jagadish is spending what is required for the film has ensured a good run for the film, said Vijaya Raghavendra.  Srujan Lokesh said that the four artists of the film have indeed become very good friends.  Tarun and Ravishankar also spoke in the function to express their happiness and thanks to producer Jagadish and director Ram Narayan for choosing them.

Vijaya Raghavendra who did not have a high opinion about a song of the film has to shell out some money to take Tarun's family to a trip to Goa.  That is because he had taken a bet with Tarun that the song would not become a hit.  Now, the song has turned out to be a hit,

Vijaya Raghavendra promised to take Tarun and his wife for a Holiday trip to Goa.  Srujan Lokesh said that the other two friends and Snehith should also be included in the group.  Jagadish said that the film is doing well and even in its fifth week, the film was running full houses on Holidays which has given complete relief to him as a producer.  The film is sure to complete a fifty day run in 8 to 10 centres in the state, he said underlining the fact that such long run for a film with not to popular stars is a big reason to cheer.  He said Darshan's presence in the film was made known through the publicity material only after the film completed its 25 day run which had also helped the film.

"The film is running because of good reviews in news papers and good talk it has generated.  The mouth publicity has helped a lot.  I will dedicate this success to my entire team' said Ram Narayan. Master Snehith thanked the media for supporting the film and requested the same level of support to  "Kamsaale Kaisaale' which is releasing on Friday, November 9.