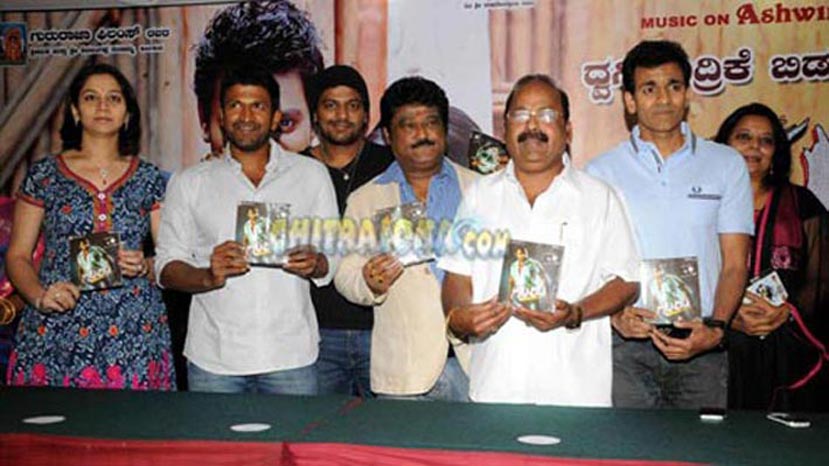 Power Star Puneeth Raj Kumar released the audio album of Jaggesh directed "Guru' which is produced by Ms Parimala Jaggesh.Jaggesh two sons Gururaj and Yathiraj are featured in this film in important roles, while the former is the hero of the film.

There was a big turnout of the well wishers of the industry including B. Vijaya Kumar, President of the KFCC and Rudresh, the Chairman of the Kanteerava Studio.  Puneet and Raghavendra Raj Kumar's presence in the audio release function had added some color to the proceedings,  Jaggesh appeared very happy over the presence of the Power Star and his elder brother.

Puneet described himself as a big fan of Jaggesh. "I see many number of people coming here to wish Jaggesh and his son. I am sure Guru will be blessed by Kannada film fans.  He will always have my support' said Puneet. Raaghanna said Jaggesh has realised his ambition of becoming a director through his son.

"I have been in the industry for the past three decades.  I had to take up film direction under the pressure of my son. I had the pressure of completing the film in a scheduled time frame, but there was lot of pleasure in my job.  I did carry some apprehensions about my debut as a director, but thankfully I was relieved when some of my family friends and industry personalities who watched the film gave a thumbs up for the film' said Jaggesh.

Ms. Parimala Jaggesh also felt that her husband is a very good director and a producer's director. "I was little nervous in the beginning and felt my budget may exceed.  But Jaggesh struck to the budget estimates and made a fantastic film for my banner. It is a Paisa Vasool film ' said Ms. Parimala Jaggesh.

Gururaj also said that his father is a talented director and he was very happy to have worked under his father's direction.  "He has given me a new image through this film' said Gururaj.

The audio release function was well attended  and even media had a good representation.  Jaggesh's younger brother and actor Komal was present to bless his nephews and also to wish his elder brother a big success.   Rockline Venaktesh, Sudharani, Abhijith, Sudarshan, Shylashri Sudarshan and Naga Prasad of Ashwini Media were present during the occasion.