Sudeep Searching For The Villain Team 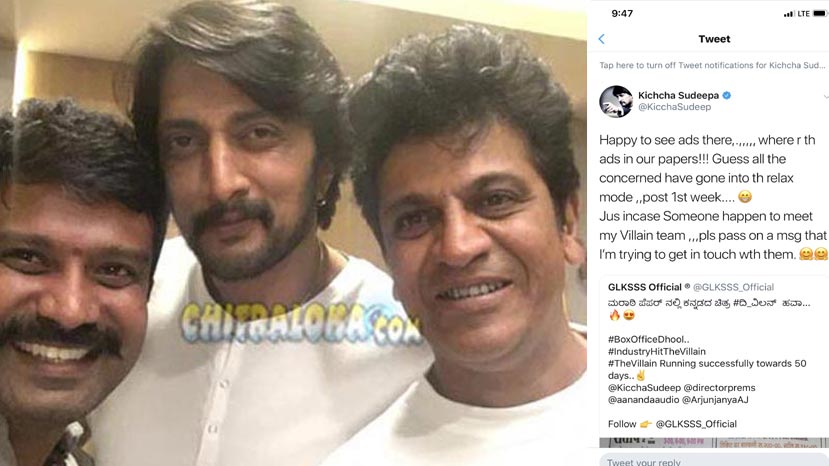 In a message laced with irony, Sudeep has tweeted that he is searching for the team of The Villain. Responding to a fan's message pointing out the advertisements of The Villain in Marathi newspapers, the star has said that advertisements (read publicity) is missing in Karnataka. He is also unable to contact Prem or producer Manohar it seems. After a press meet four days after the film's release there has been no news about the film from the film team.

Sudeep has said, "Happy to see ads there,.,,,,, where r th ads in our papers!!! Guess all the concerned have gone into th relax mode ,,post 1st week.... Jus incase Someone happen to meet my Villain team ,,,pls pass on a msg that I’m trying to get in touch wth them."

It is said that Prem has switched off his phone after abusive messages from fans who targeted him and his family. "He is hurt by the personal attacks" a team member said.

With the director keeping away there has been no publicity of the film after the first week. The producer announced that the film has grossed Rs 60 crore in the first four days. But after that there has been no communication since two weeks. Distributors say the film is still doing good collection and it is still being screened in 35 single screens in the BKT region. The film was expected to become the first Kannada film to gross Rs 100 crore, but lack of promotion may hurt it.