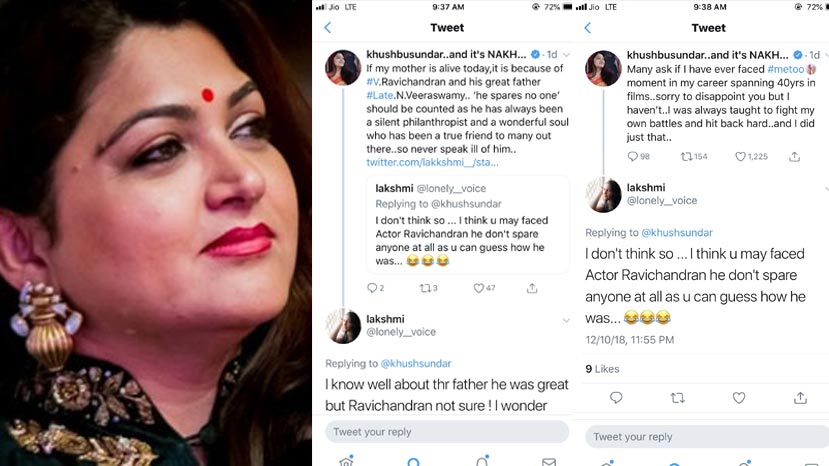 Actress-politician Khushbu has defended Ravichandran from a random troll who tried to cast aspersions on him. The general comment on the #MeToo campaign threatened to turn into a controversy over Sandalwood star Ravichandran but Khushbu defended him saying he was a great human being who helped those in need and that was the only way "he has spared no one".

About the #MeToo issue Khushbu remarked that she never had such an experience (of harassment) in her career. She said "Many ask if I have ever faced #metoo moment in my career spanning 40yrs in films..sorry to disappoint you but I haven’t..I was always taught to fight my own battles and hit back hard..and I did just that.."

Replying to this a Twitter user calling herself Lakshmi replied "I don't think so ... I think u may faced Actor Ravichandran he don't spare anyone at all as u can guess how he was.." The comment was meant to suggest that Ravichandran was a kind of person who would have harassed women.

Khushbu replied with her own example defending Ravichandran and said it was wrong to make such fake allegations against the Kannada actor. She said "If my mother is alive today, it is because of V.Ravichandran and his great father Late.N.Veeraswamy.. ‘he spares no one’ should be counted as he has always been a silent philanthropist and a wonderful soul who has been a true friend to many out there..so never speak ill of him."

Despite this the troll Lakshmi contained to abuse the actor by saying "I know well about thr father he was great but Ravichandran not sure ! I wonder how his sons born opposite to him."

Upset with this continued harassment by the Twitter user an angry Khushbu said "Were you part of the so called ‘he spares no one’ ?? Shame on you..Sadly hearsay is what educated illiterates like you jump just to be there in wave for the heck of it..you are an insult to the women who are fighting out there.."

The troll continued making insinuations against Ravichandran even dragging the case of actress Bindiya. Khushbu remarked "I ask again.. he w well do you know him?? Or are you a victim here?? If not, stop maligning a person.. don’t speak to gain publicity ..it degrades other women out here who fighting it out.." ending the conversation.