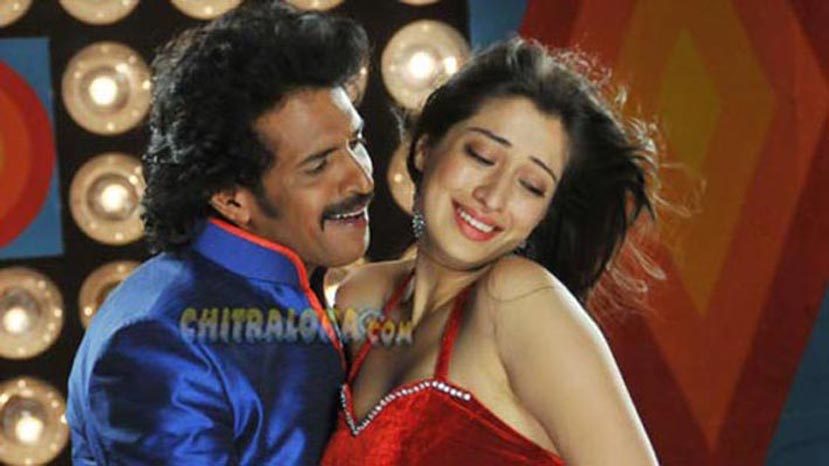 Despite the threats of rain and continued agitation regarding Cauvery Water dispute in several districts in Karnataka, Upendra starrer "Kalpana' started off with a positive note getting good response in ticket windows. The collections have been in the range of 80 to 100 percent in most of the major cities, while in the B and C centres the collections have been improving show by show to reach nearly 80 perecent on average.
The advantage for the film is that the reports from film watchers and even the critics is very good. There has been positive response to the film from media critics and the ratings have been ranging from 3.5 to 4 in the scales of 1 to 5. Kalpana had a perfect start though Uppi's previous film God Father was considered an average film by trade pundits, while Aarakshaka was considered a flop. Only a social fantasy film like "Kataari Veera Sura Sundaraangi' was able to reap in a little profits mainly because of the big success of the 3 D version of the film.
Looks like Kalpana has got a better opinion from the film fans than the previous films of Upendra released this year. In centres like Shimoga, Chitradurga, Davanagere, Hubli and other places the collections have touched Rs. 1 lac or more which is certainly creditable. The Mysore distribution area collections have been very good despite agitations spreading to interiors. Santhosh has recorded very good collections and because of good reports, more number of people were seen in evening shows despite rains playing spoil sport.
Kalpana will have an added benefit of two Holidays in this week which may benefit the film very well in the first week. With a positive response from first day watchers, the film is sure to touch the magical figure of nearly Rs. 2.5 to Rs. 3 crores share in the coming days. Kalpana has been released in lesser number of theatres in Bengaluru to fecilitate good crowd coming to select theatres which is a good idea.
"The film is a perfect diet for the semi urban and rural audience. I expect the film to get larger revenue in these centers. I am also curious to know how this fiilm runs in multiplexes where Upendra seems to have a stronger hold' says a trade pundit who expects good chunk of revenue from single screens than in multiplexes.