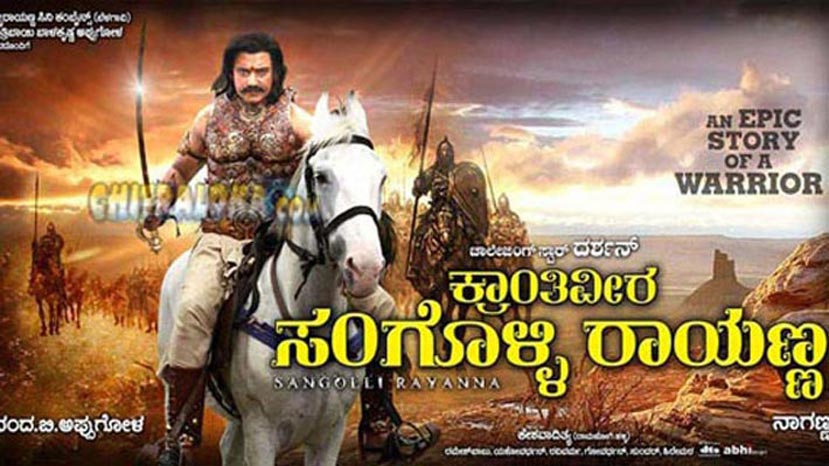 Kannada film fans may have to pay something extra for their tickets  to view the most awaited film "Kranti Veera Sangolli Raayanna' starring Challenging Star Darshan.  The costliest ever film made in Kannada is being produced by Anand Appugol and directed by Naganna.

The film's distributor H.D.Gangaraj who is returning to film direction work after a gap of nearly five years since the release of the film "Sivaji' starring Super Star Rajnikanth and directed by Shankar said that the ticket rates increase if any will be there for just a week, so as to mobilise more share for the producers.  He said that the people who are prepared to pay twice the ticket amount or even more for purchasing the ticket in black will not mind this additional burden on them to view the film in the first week itself.

'The film will be releasing on October 12' declared Anand Appugol in a press meet organised on Wednesday.

Challenging Star Darshan is travelling to Switzerland along with his family members on September 30 to be part of the shooting of "the film "Bul Bul", an emergency press meet was arranged for media briefing and bites to be given to Television and Radio Channels.

Ms. Jayaprada, M.P. who plays the role of Kittoor Chennamma was not present in the press meet because of her commitments.  Darshan, Nikitha, Shashi Kumar, Shobharaj, Ravi Chethan, Bank Janardhan, Sadashiva Brahmavar were present in the meet.

Anand Appugol said that as per the present indications available with them,  the first copy will be out   on October 3 or 4.  Immediately the film will be censored and it will be ready for release on October 12.  They have already earmarked Bengaluru's Narthaki and Mysore's Sangam as the main theatres, said Anand.  He said that a big release has been planned in all the district head quarters where Sangolli Raayanna's fans will take out a procession to decorate his cutouts in front of the theatres and doing Milk Abhishekhams.

Naganna said that the entire unit is confident of the big release of the film.  There are plans to release the film simultaneously in Mumbai, Pune,  Solarpur, Akkalkot, Sangli in Maharashtra and Chennai in Tamil Nadu.   Already a distributor based in USA has come forward to release the film in USA, UK, Canada and other parts of Europe. Amaranatha Gowda, the President of AKKA will be overseeing the release of the film.

Anand Appugol's brother who is now living in Australia will be releasing the film in Australia, Singapore and Newzealand, said Naganna.