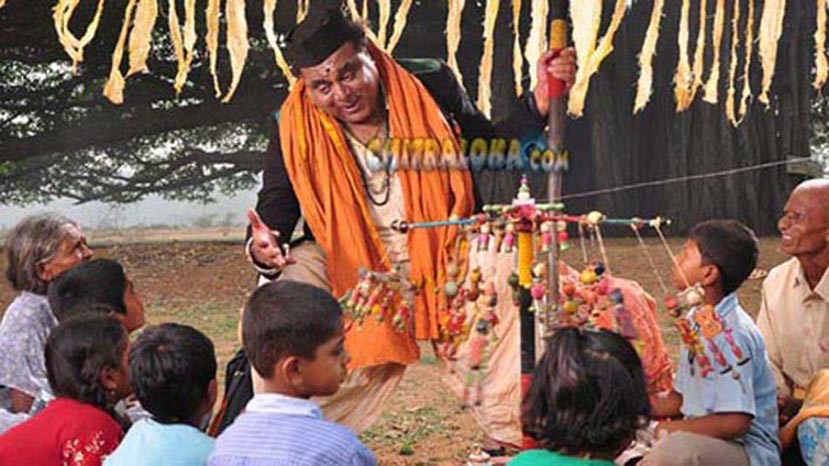 The pre release curiosity that was built up before the release of the Yogaraj Bhat's Drama and the subsequent top level appreciation that is coming out of the film fans has created a new trend in the much depressed Kannada film music industry. Many appreciative voices are still telling that Drama is the best music album they have heard in the recent times. Certainly Drama C.D. album has taken music industry by storm.

Just around the time when songs of Prem Adda was just trying to become popular with three best song compositions, the Drama album has become a rage just after four days of its release in the market. Anand the younger sibling of the Anand Audio group says that he has never experienced such a rage for a non star cast film to this extent.

"Even though we had published in news papers that we would release the album on 21st September, we had to delay till Monday, But audio shop owners from many parts of the state who were pressurized by the music lovers were giving us anxious calls to know about the exact date of release. We had to work overtime to see that the shops around will have audio albums by Monday afternoon' says Anand. Shyam of Anand Audio says that the response for Drama audio can only be described by one word -"Fantastic'.

Drama album has won the earliest battle being the most appreciated C.D. in recent times mainly because of its superiority in many parameters. Hari Krishna's instrumentation, mastering, Bhatru and Kaikini's lyrics and using of voices of respective stars before the songs in dialogues have aptly gelled.in the album. For example, Rebel Star Ambareesh's dialogues before the Bombo Adsonu song, Yash, Radhika Pandit, Neenasam Satheesh and Sindhu's voices perfectly fit into the rapping in the songs. The best thing is that the explanatory notes that come before each song adds to the beauty of the song. For example, the explanation from Bhatru himself before the Chendutiya Song is fantastic as the words written by him has combined literary and contemporary flavor as the song itself. And Sonu's rendering of the song is extraordinary. Even the rapping of voices of Radhika Pandit before Hambaladha Hoovanu rendered by Sunita Gopuraj is good, while lyrics written by Jayantha Kaikini who has written the only song in the album is just superbly written.

The lyrics of the songs have lot of inner meaning in them, but Bombe Adsonu has philosophical overtones like never before. I think Bhatru has been bogged down with a sense of repentence while writing this meaningful song as he had been castigated for writing many meaningless but yet popular lyrics in many recent movies. By this master stroke of writing Gombe Adsonu and Chendutiya Song, he has tried to erase all the criticisms leveled against him, but there are also different type of tappanguchi variety in the slowly composed 'obba t.k. engtesa' and "drama, tananananaa, othla hithavachana' songs. Some how,Bhatru looks to fit into the top slot as the lyricist of variety who holds a Kubera's reasure as for as the dictionary of words of different dialects in Kannada are concerned. In Drama he has shown that he can use perfect Mandya dialect which is very rich in its folk content and yet appeal to the large section of music lovers.

Viewed in totality Drama album looks like a singular contribution of Bhatru to somehow retain the superiority of the songs in films directed by him. Even in Paramathma the quality of songs were superb as in Manasaare and Pancharangi too. The importance of songs in Mungaru Male and Galipata need not be overemphasized.

It would also mean some body is lying when Hari Krishna's strong composition is not given due adequately and proportionately.

Purchase the album and you are sure to enjoy the quality of the songs. Dont forget to buy Prem Adda which can also qualify for the second best audio album in recent times. Everybody will certainly enjoy the Melkote song.