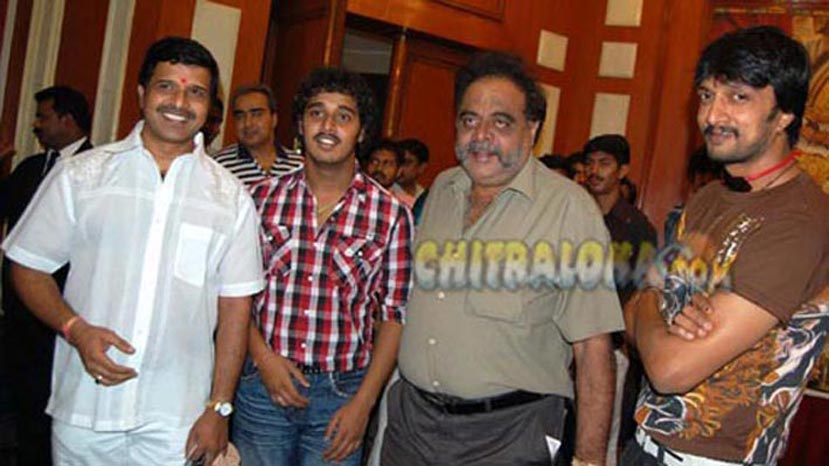 Well known film producer-director S. Narayan says that his next venture Veera Parampare will be a huge film to be made with a big budget and big stars.

"This is the costliest film that will come out under my direction. I have to chose a big canvauss for making this film as the story needs such a presentation. When I started writing this story, I did not realise that it would take me to the peak of my writing abilities, as I feel that this is the best script I have written so far. It will be entertaining, classy and visually brilliant' says S.Narayan.

Narayan was addressing a press meet of the film in the presence of his leading stars Ambareesh, Sudeep and Aindrita Ray. Narayan has composed the music of the film while Giri is the cameraman.

Narayan remembered how he had telephoned Sudeep one day to tell him that he wanted to make a film with him and the actor immediately agreed to work with him. "We all know Sudeep is one of the most brilliant artists and it was natural that I wanted to work with him. I had thought of remaking Tamil film Swami in Kannada, but before the film's shooting was to start, Sudeep told me with lot of hesitation that we should go for a film with original story than a remake. I instantly agreed to his suggestion even though I had to bear some financial loss.

Now, after writing the script of the film and completing the music composition I want to thank Sudeep for giving this suggestion' added Narayan. He said that he was not able to think of any other artist for the role Rebel Star Ambareesh was playing. The heroine's character was zeroed on Aindrita as she perfectly fitted into the role and I have chosen Vijayalakshmi Singh for a special role in the film, Narayan added. He said that none of the stars of the film have so far have heard the story of the film.

Sudeep said that he had agreed to do the film mainly because he respected S.Narayan as a producer and director. He was happy to work with Ambareesh again.

Ambareesh said that S. Narayan has chosen Belgaum and Gokak in these times when

temperatures were raising. ' But I just agreed to do the film because of Narayan' he said. Aindrita Ray thanked Narayan for giving an opportunity to work with Ambareesh for the second time and first time with Sudeep.