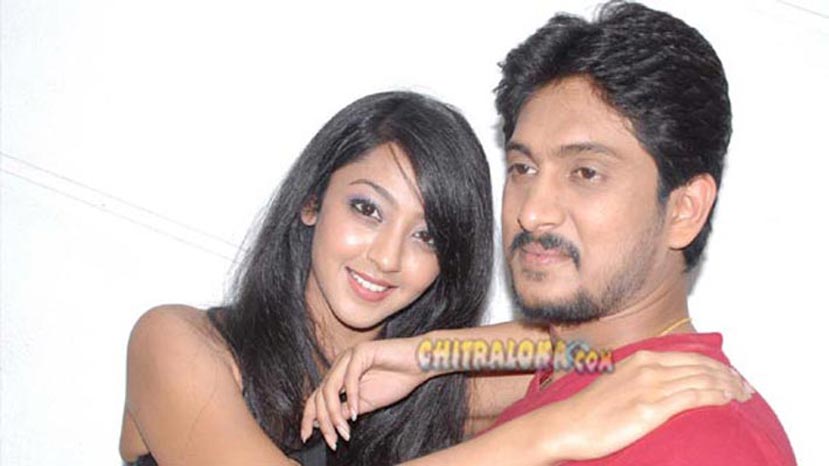 The shooting of the last song of Ajay and Aindrita starrer Manasina Maathu produced by Praveen (DK Ramakrishna) and directed by Anantha Raju has been in progress in Abbaiah Naidu studios . The three day song sequence shooting which started on Wednesday will be finishing on Friday, September 18. Imran has choreographed this song for which music is composed by Neel. The film has been shot in three special sets created at Abbaiah Naidu studios.

The film's producer Praveen had called a press meet on Thursday to brief about the shooting of the song and also give some information about the film. "We have got the print ready without this song. The film has been seen by some people connected to the film and also distributors who have all appreciated the film. The film is a romantic love story which is very clean in its narration. We have composed romantic melodies for the songs and this is one melody song that we could not shoot earlier. But our film's hero Ajay wanted that this song has to be shot and even our distributor Ajay and the film's heroine Aindrita felt that the song had to be included in the film as it would enhance the quality of the film. We have already shot two songs of the film in Kullu and Manali and one special song has been shot in a special set created at Abhiman studios. The film is very rich in songs and story content. The film's director Anantha Raju has done a very neat job in making this film appealing to family audiences' said Praveen who also thanked all the artists and technicians in the film who had worked hard for the film.

Giving the reasons for delay in shooting the song, Praveen said that he fell sick and even now has not come out of his health problems for the past six to seven months. And he wanted to release the film in a good time. "Now, I am happy that Krishnana Love Story in which our hero Ajay is in the leading role has completed a 100 day run and good family oriented films like Eradaneya Maduve, Naana Nanna Kanasu have run well. Pancharangi has also opened to a huge response. I am sure even our film will be getting a good response' said Praveen, The film's director Anantha Raju said that the film is based on Tamil film `Roja Koottam' has a very good story content and both Ajay and Aindrita have shown terrific on screen chemistry.

Ajay said that the film is a good romantic film. Aindrita who has already seen the film without the song sequence said that it would be another big film in her career.