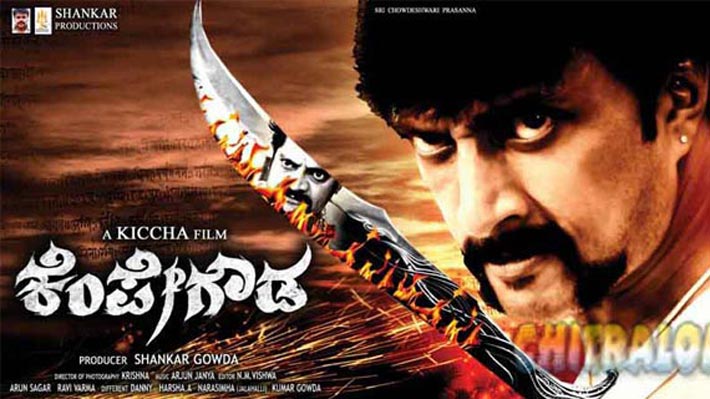 Actor Sudeep along with his wife Priya were present during the premier public show of Shankare Gowda's production Kempe Gowda at the Santhosh day. Infact Sudeep was present in the projector room during the morning show and was watching the public reaction for his fifth directorial venture.

And he was present till the conclusion of the second show after which the whole team of Kempe Gowda celebrated the big opening of the film in the entire state on the roof top of the Santhosh theatre.

After the morning show was over, many channels and press representatives went on the roof top of Santhosh to speak to Sudeep. The bites about his reaction to the public response were also taken.

By then producer Shankare Gowda had already taken the report about the film's opening and response of fans from many the 126 theatres in the state which had released the film.

"I have taken opinion of theatre owners and our own representatives sent to theatres. The response has been uniform. The verdict is that the film is sure to be a very big hit' said a happy Shankare Gowda who has put in lot of efforts and resources to make this movie.

Incidentally Kempe Gowda happens to be Sudeep's fiftieth film release adding up all his films in Kannada, Telugu, Tamil and Hindi. (Sudeep's Raktha Charitha was made in three languages separately, though his films like Phoonk 1 and 2 and Rann were dubbed into Telugu and Tamil much later).

Sudeep and Priya made a picture perfect presence during the morning show of the film.

Though the media in Karnataka have never written anything adverse about this much loved couple, but some non Kannada websites and print media had written negatively about their souring relationship.

Though Priya was very much part of the household of Sudeep as could be seen by his fans during the birthday celebrations, the non Kannada media had some times written about their so called separation. But Sudeep and Priya quelled all such rumours with their presence together which was also captured by the television media after the morning show was over.