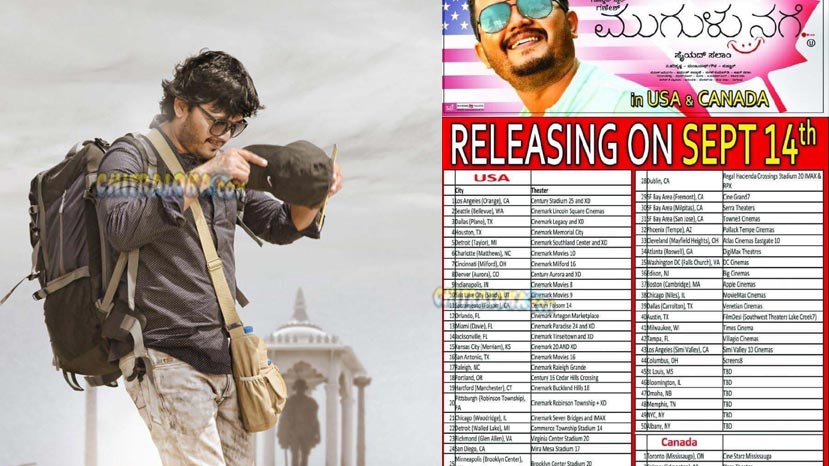 The latest Kannada hit film Mugulu Nage is releasing in the USA and Canada on September 14. What is of significance is the record the film is setting by simultaneously releasing in the maximum number of screens. The film will release in 50 screens in the USA which is the highest number for any Kannada film so far. It is also releasingin four places in Canada; Toronto, Calgary, Montreal and Ottava.

In the USA the places the film is releasing include Los Angeles, Seattle, Dallas, Houston, Detroit, Orlando, Kansas City, Washington DC, Atlanta, New York and Austin. The film released in India on September 1 and has turned out to be one of the biggest films of the year in Kannada. The combination of director Yograj Bhat and actor Ganesh that has come together after a gap of nearly 10 years had appealed to the interest of the audience. They were not disappointed and both the critical and commercial success of the film across Karnataka testifies. The film has also won the praise of the audience outside Karnataka where it released including in Chennai where it is running to packed houses.

Kannada films are increasingly getting bigger releases in the USA in the last two years. Rangi Taranga has the record for the biggest simultaneous release so far. Mugulu Nage is going to trump that with this wide release.

Syed Salam has produced the film with Golden Movies and Yograj Cinemas. The US release of the film is being handled by Kasturi Meida, Dreams Media and Tanish Media.