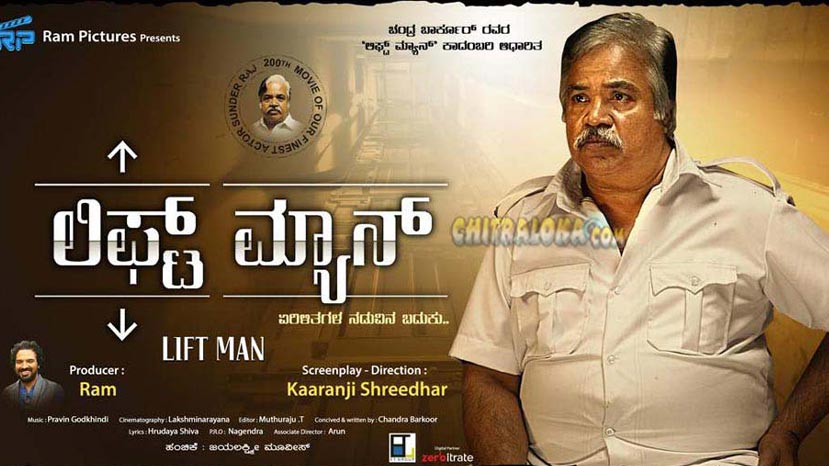 It is not everyday that you see an ordinary man as the protagonist in a film. It could be a cop, rowdy, gangster, techie or doctor. Even when it is a simple profession the hero ends up as a rowdy or something big. In such a scenario how about a film about a lift operator? In liftman, the leading man Sundar Raj remains a liftman all his life. He does not become a hero or do something great. But the small things he does in his simple life are what makes it a believable film.

The film is a commendable effort for the reason that it chooses such a subject. The film is about a liftman in Vidhana Soudha who is in the middle of a political storm. How can someone hardly noticed become a subject of a crisis? The story unfolds in a live TV news. Manjappa the liftman recounts his life story and the special bond he has with an IAS officer. The story culminates with Manjappa himself having an introspection whether he is as good as he makes himself out to be.

The film is narrated in a simple format without much of a grand display. Most of the film takes place in just three locations; the lift, Manjappa's house and the TV studio.

Manjappa's life is not uneventful. Though he is in a simple profession he encounters many things of the high and mighty. He knows his place and does not try to exploit them. The film shows that every life and profession is important.

Sundar Raj in his 200th film has made a wonderful performance. He makes the acting look so simple. Director Sreedhar keeps the narrative tight and makes a meaningful film. Praveen Godkindi has given good music. Liftman is a film for those looking for a message and meaningful films.