Sandalwood Gears Up For Big Releases 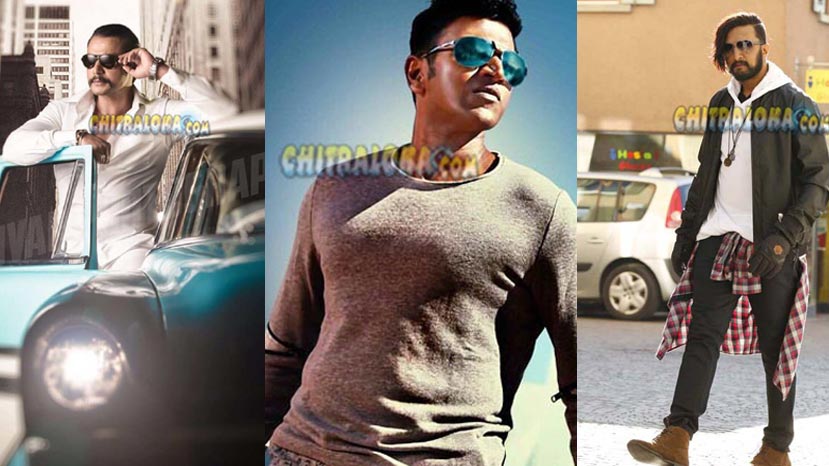 'There is No business like show business'... as the saying goes, 2016 saw the release of the highest number of Kannada films ever and made a new mark in the Indian Cinema with extraordinary talents. The first Kannada film that released in 2016 was Shivarajkumar's Killing Veerappan, and continuing the trend the first Kannada release of 2017 was Shivanna's 'Srikantha' and Ramesh Aravind's 'Pushpaka Vimana'.

The first Trimester of the year 2017 is already shaping up to be impactfull with numerous movies scheduled to release like Sudeep's 'Hebbuli', Puneeth's 'Raajkumara' and Darshan's 'Chakravarth. With these big movies lined to release, Kannada movie lovers and the industry is hopeful that these movies will screen in maximum theaters for a long run against the intense competition by other language movies.

Rakshith Shetty's Kirik Party released last year end is still running strong in the race. Kirik Party stood firm against all the other language big movie released and re wrote all the records of movie success.

The upcoming months is a treat for the kannada cine lovers as much awaited Hebbuli, Raajkumara and Chakravarthy is being released. Even in the music arena, we see most of the kannada movie songs trending the charts.

The discrimination and damage caused by the multiplex's to Kannada film industry is unaccountable. .Since Bangalore has majority of Theaters and multiplexes, it acts as both advantage and dis advantage. Theaters in Bengaluru screens other language movies too, which provides a less scope for Kannada Movies. Kannada movie makers has to strive to acquire the theater screens. However, The quality films have also suffered with lack of screens to present their movies.

The big stars are not just stars or super stars, they are the brand themselves, and when their movies releases it automatically becomes an event to the kananda movie lovers and to the industry. With these celebrity movie releases in hand, there is also a hope that discrimination of multiplexes will hopefully be refrained.

It is a taboo long gone that people wait only for big budget movies with A List star cast. Film makers are gaining back their confidence and are making movies with new talents. The appreciable part is that movies like thithi, karva, rama rama rey, godi banna, kirogoorina gaiyaliyaru busted all the myths that only star studded movies can propel to the success of a film. Small budget movies are making there way up higher with their extraordinary showcase of talent and this is also acting as silver lining with new age film makers and enthusiasts.

Meanwhile, the independent Kannada movies are silently making noise by premiering themselves at Film Festivals on a National and International Scale.

Unforgettable Part of all is Kannada Film Industry has been witnessing an amazing change over in technology. Film Makers are moving ahead of their time and is providing equal attention towards VFX and SFx in their movies. Opening up their space, new age technicians, dancers, stunt directors has been hired from different parts to add up the quality in their movies. Nation's Jaw dropped when legendary late actor Dr Vishnuvardhan was recreated through Digital Head Technology in the movie Nagarahavu.

Biggest element of all this is, a film maker strives to deliver his best to the audience. The new age film makers and talents are definitely the fresh breath of air which industry needed to break the conventional method. Irrespective of the movie budget, Kannada film industry surely seem to open up wider at the Global Market.