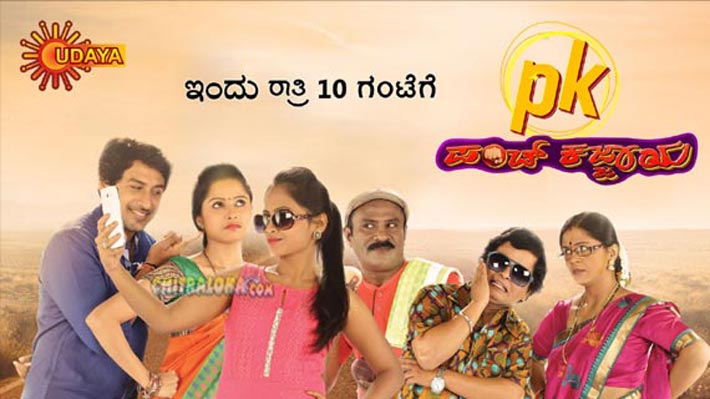 Panch Kajjaya new show will be telecasted on Udaya Tv from today.  This show will be from Monday to Friday at 10.00 PM. This is an out and out comedy. Every episode new story and new concept. Very light hearted refreshing content to wind up their day. Good casting and punching dialogues.

Punch Kajjaya, is a full-fledged comedy genre show where every episode has a new story and a new concept. As a very light hearted refreshing content to wind up the day, it will aptly be aired daily during the week. The story revolves around five characters of a family. A funny and ever romantic dad, stubborn mom, wanna-be scientist son and his beauty parlour owner wife and a Facebook addict daughter of the house all creating moments of hilarity and chaotic fun every day.

Summary of the storyline:

A funny and ever romantic dad, Stubborn Mom, Wanna be Scientist Son and his Beauty Parlour Owner wife and a Facebook Addict daughter of the House create lot of fun every day.

Son Lakshmivenkaramana shivakrishna prasad is a hardcore  Dr.Rajkumar's Fan, he starts dancing when ever and where ever he listens Dr. Rajkumar songs. He wants to be scientist, but fails miserably every time. He loves his wife and his mother cares about him. That leads to the conflict between mother in law and daughter in law.

Father Kami is  aged 50+  but still would love to make up! You can see him doing make ups in bed too, before sleeping. Reason- some beautiful girl might come in his dream!:)

Daughter, Maina is a Facebook freek- she wants to put everything on FB. Tiny quarrels to big parties. She'll loose sleep if she doesnt get desired likes/comments.

Daughter in Law Meera secretly runs a Beauty Parlour. If that secret matter reaches her MIL, all the hell will break loose.  Lamboo who loves maina and tries to woo her everyday.

Serial revolves around these characters.

What’s special about this from the usual soaps: