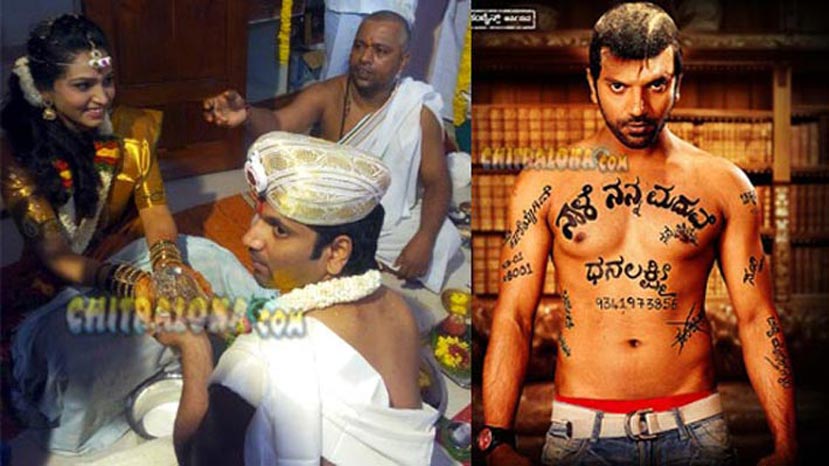 May be he was not born superstar. But he sure is living nothing less than the one. Of course the struggling was involved and the success was over night. But he won million hearts through his simplicity and acting. Now he is in news for the news which he hid from the society. Actor Neenasam Sathish is one of the leading actors from the industry right now. Since his ‘Lucia’ 2013, which got him International recognition he sure become talk-of-the town personality.

He was also being called one of the most ‘eligible bachelor’. And sure had huge female followers. Every interview he went, every function he attended, ‘Marriage’ was the hot topic for this actor. But every time he denied saying ‘Right now I am not interested. Only focused towards career’. He said the same statement to the Chitraloka.com editor when recently asked.  At the end he even said on his own that when he gets married, ‘he will let the whole world know about it.’ But what happened to this statement was, none of us imagined that while giving this statement the actor is already married to Supreetha. We also discovered that actor Neenasam Sathish never took any of his movie producers to his villa till date. Not so surprising after the secret is revealed!

If we go back to his film career, Neenasam Sathish has quite female fan followers. And he is one of these actors who fall under ‘Mane-maga’ of Karnataka category. His movies are doing well in recent years. Then what made him keep the ‘Wedding-secret’ from the world?! Considering his later statement, he accepted because the news was surprisingly broken to the world by media. If not, how long the actor would have thought to hold this news for himself? We wonder how his family supported him for this. Imagine how his wife must have felt?! That being married to a star and she still remain ‘non-existed’ to the world?! Literally his wife was not born till yesterday to the society! It’s as awful as it sounds.

Hemashri Had a Failed Marriage

Is Shruti So Naive? - Analysis