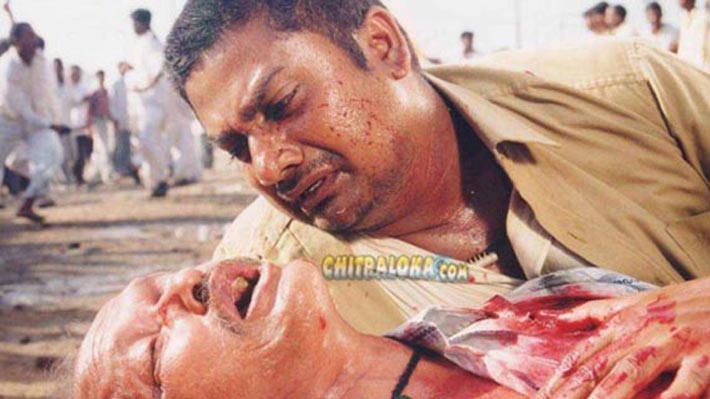 Ours is the age of substitutes. Instead of language we have jargons. Instead of principles, slogans and instead of genuine ideas, bright ideas. Eminent thinker B.Suresha surely belongs to the slot of bright ideas with genuine effort. The world has changed from wire to wireless and more and more can be done with less and less. Like this within the framework the director of this well thought film ‘Artha’ has been able to pour in five liters of ideas in a three liter can.

We all know history is a bucket of ashes. But at the same time it is inseparable despite of globalization and liberalization making a strong foot hold. With all this on the one hand the film ‘Artha’ is a meaningful stuff even though at the end the protagonist says ‘Nanane Artha Agthilla’ losing his ardent friend Abdulla and son at the same point of time. Yes. We really don’t know what’s happening to this ‘Karma Bhoomi’. Bizarre of opportunist attitude perhaps is a great barrier.

However, look at the various plots and sub plots the director handles. He brings in the communal harmony, the stark realities of life, the youth - the jumping jacks in jeopardy, the ambition of a senior member of the family, the ‘Vachanas’ suddenly taking the viewers to much refined thoughts, the sober and tear jerker wife even after facing thorns in her life still struggle for existence, her sublime concern, how we enter into vicious circle (Raniyamma a prostitute life), the rampant corruption and not least but the primary attitude of ourselves trying to bring in change from hearing to others. All these elements touchingly told is ‘Artha’. This is now doubt a wholesome entertainer. It makes us to think about what’s happening in our surroundings.

All the lead artistes in the film have been picked immaculately. Whether it is Rangayana Raghunath, Megha Nadiger, Arundhati, Kiran Barkoor, Walter D’Souza, Renukamma Murugodu or baby Chandana the selection is fine. The background music is apt the screenplay also moves very competently.

Good art is not what it looks like, but what it does to us. The director of this film showed his exemplary skill and his attitudes at looking this art form is sensible.