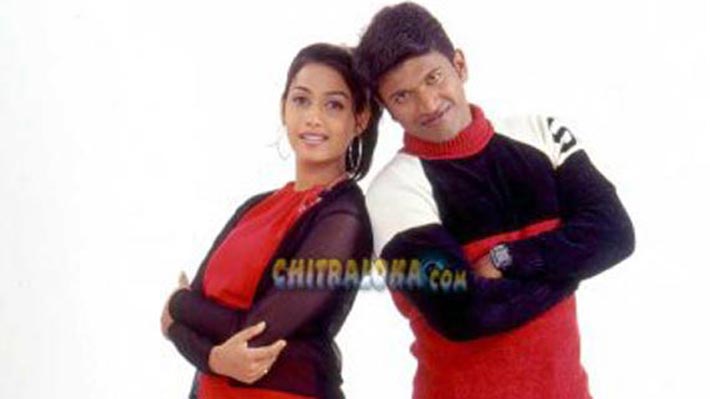 APPU has cleared all the apprehensions. To the present scenarios of filmdom this is a nicely made film. As a hero ‘Appu’ – Puneet has worked very hard and his casual and up to date approach is magnificent. ‘Appu’ deserves approbation from all the three centers.

Appuavaru (Puneet Rajkumar) hails from a lower middle class family. He is chaka chak and jolly going absolutely straightforward in his nature. His father is head constable Venkateshaih (Srinivasamurthy). A favorite of all in the college is hit badly by the opponent gang. The cool and icy looking Suchitra (Rakshita) gives proper care and the required blood to Appu and saves him from pitiable condition. Understanding in the right wrong direction Appuavaru falls in love with this pretty girl daughter of Commissioner of Police. Appu is dares enough to bring what is flowing in his mind to the police commissioner. But before this Appu makes a daring attempt to prove his ultimate love for Suchitra. He is asked to fall from a height by Suchitra. He falls from the height but checks his mind in the middle of the fall and comes back and asks Suchitra what she would do if he dies. Totally moved with this it is perfect match of minds from then on between Appu and Suchitra. In between we have the hapless father asking his son not to continue his love journey, as there is wide gap in social status. No says Appu and continues his mission in a firebrand style. The Commissioner of Police hatches an idiot plan to finish off Appu so that he can get rid of his daughter Suchitra to an IPS officer. At the same time Appu prepares a solid plot and throws a challenge to Commissioner of Police that he would marry his daughter in front of his house. When arrangements are on both the sides Appu faces a television crew in a market place. In the process of his interview Appu is attacked. This goes live in Television and Commissioner of Police automatically gets exposed. Appu asks one question to Director General of Police what is wrong in a head constable son marrying a daughter of Commissioner of Police. Appu just does not end at this and passes an IPS examination. He even pranks with his father by issuing an order in the last frame of the film.

Appu is electrifying in his dance and choreography is refreshing. When it comes to action he is filled with 1000 mega watts of power. His dialogue delivery is also natural. The costumes in songs sequences deserve special mention. Rakshita making debut needed to be livelier in her expression. No doubt that she has the heroine qualities. It is senior actor Srinivasamurthy remains in the memory for his touching performance. Avinash as CP supports well and so is Sumithra.

Only two areas that needed more attention are cinematography and action. Cinematography in the beginning strains the eyes. Action scenes could have been brought down. They are composed well but two fights could have been cut down. Appu with a knife attack forging ahead without medical aid is beyond reality. When he is so much real throughout the film in his attitude this one could have been improvised.

This is a film for all. Buy a ticket and have two and half hours of good summer vacation in Bangalore theatres.