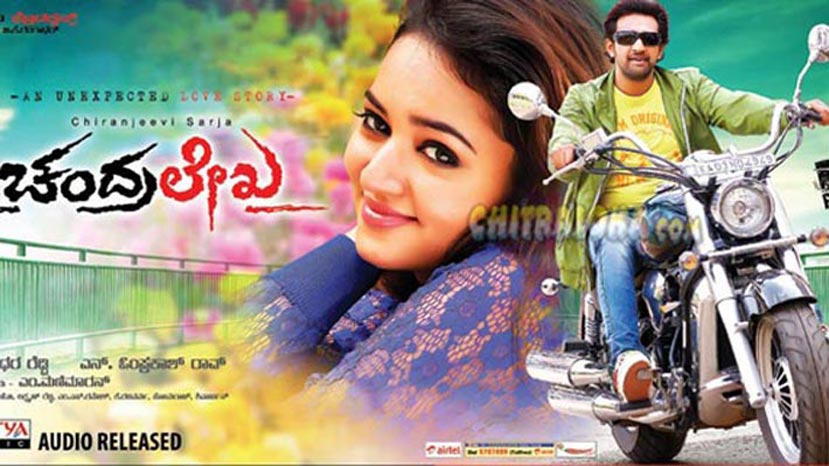 Omprakash Rao is not known for making comedy or horror films. His expertise is action and more action. The director is also candid about being inspired by other films, brazenly picking up scenes from non-Kannada films. So when he made an official remake of a Telugu film, it was indeed surprising. And the product, Chandralekha is refreshingly good. For Chiru it is the second film in the horror genre after Whistle.

There are only four principle characters played by Chiru, Shani, Nagshekar and Sadhu Kokila. The four go to a guest house to commit suicide. The place is haunted. What are the reasons for four people to join together to commit suicide? All of them have their own stories. Their attempts to commit suicide too keeps postponing everyday. Their back stories and the strange happenings in the house combine to create a mix of comedy and horror which is not common.

The first half of the film is kept short while most of the entertaining stuff is packed in the second. The story is revealed bit by bit with the horror and comedy in between. This is an interesting way of mixing the plot with the thrills. Chiru plays the scared man and the jilted lover part well. Shanvi has the task of playing a lover and a possessed person. She makes the best of the opportunity and makes a memorable debut in Kannada. Nagshekar and Sadhu provide all the laughs.

The film has entertainment in abundance and easily qualifies as a good thriller. A couple of songs are good. Though most of the film is shot in a single house, there are enough flashbacks to provide visual relief. The cinematography takes care of presenting a tight narrative.