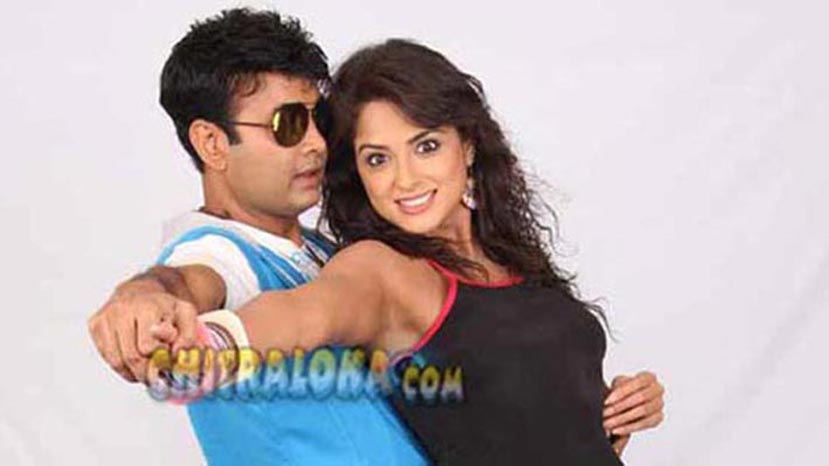 Nanda Kishore, son of the late screen villain Sudheer, who has been a comedy actor in Sandalwood, has turned director. Not surprisingly, he has chosen a comedy subject and has directed Sharan, who has become a comedy star after starring in Rambo. The combination clicks big time and Victory is one of the best Kannada films this year. It is a perfect blend of cinematic commercial elements. Though basically a comedy film that takes cinematic liberties, it is not a non-brainer sort of film. It is an almost perfect comedy caper.

The film starts with Sharan as Chandru, falling in love with Asmita Sood as Priya. They are surrounded by wonderful characters from that of a deaf couple, a bumbling cop, an misfiring don and others. Chandru's marriage starts with a disaster as his wife leaves him on the first night after she finds him lying and she sees a gift pack where he is seen nude with many girls. Chandru makes many attempts to bring her back and convince her that they are fake but she does not oblige. Giving up hope, he tries to kill himself. But each time he tries, he creates new trouble for himself. His luck changes after his wife realises that he has not committed any mistake and comes back. But now rowdies, mafia and a lookalike are all out to kill him. It is a recipe made for laughs.

Every actor makes the film more appealing. Sharan is at his comic best as is Tabala Nani as a deaf uncle. Sadhu Kokila, imitating Sudeep in Kempe Gowda, plays a cop called Sadhu Gowda to huge laughs. Ravishankar turns a comedian, though he still plays a don. But he is a don who cannot even make enough money to feed his gang a decent meal. Credit should go to the scriptwriter for coming up with colourful characters. Arjun Janya's music captures all the fun and delight. Kaali Quarter bottle and Akka nin magal nange are two songs that add up to the entertainment value. The other songs are also good. Shekar Chandru's is a master of cinematography. This is one film you should not miss watching.