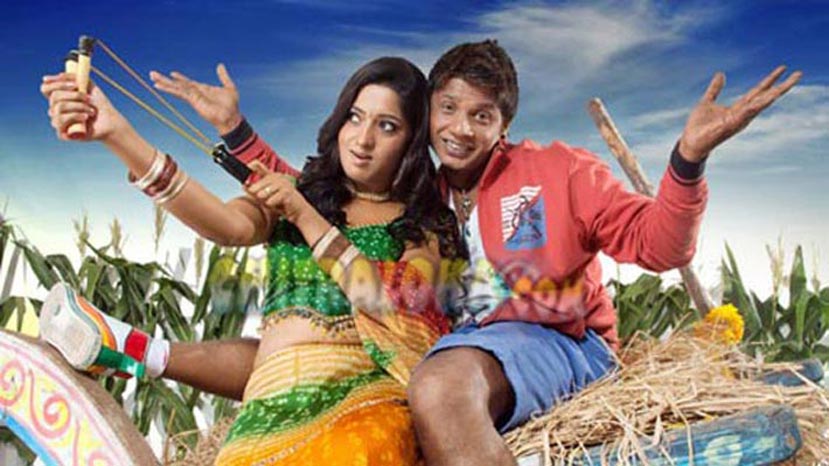 Duniya Vijay has bounced back with an entertaining and engrossing film in Jayammana Maga. It is not the cliched 'mother-son' sentiment film as the name suggests. Rather it is in the horror genre. More specifically, it is about black magic and human sacrifice and how Gods always come to the rescue before it is too late. Vijay and Kalyani as his mother, steal the show. There is something to clap, cheer and whistle about in every scene. From the word go, Jayammana Maga is a mass entertainer. First time director Vikas, with an original screenplay has come up trumps.

Vijay and his mother live near a popular temple. While the mother is very religious, Vijay is not. But he helps victims of ghosts, who are possessed to be cured by the temple's priest played by Ne La Narendra Babu. He is the only one bold enough to nail the dolls in which ghosts are captured. He falls in love with a girl who comes to conduct a ritual in the temple. A black magician wants the heroine to be sacrificed. Even the bold and powerful Vijay has a challenge on his hands. But a bigger surprise is in store as he realises that his mother and himself are part of a bigger scheme and they have to literally face their demons.

The screenplay of the film moves like a breeze. It is ably aided by the editors who give it a sharp edge. Arjun Janya's songs add charm and though there is very little of the love story, it is not important in the overall film. Some of the comedy involving Rangayana Raghu does not work. But the film does not lose focus on its primary objective; to scare and entertain. For fans of Vijay, the film will be like celebrating a festival. His punch dialogues and action raises goosebumps. This is one of the best films this year and one that is perfect to watch when the weather is cold.