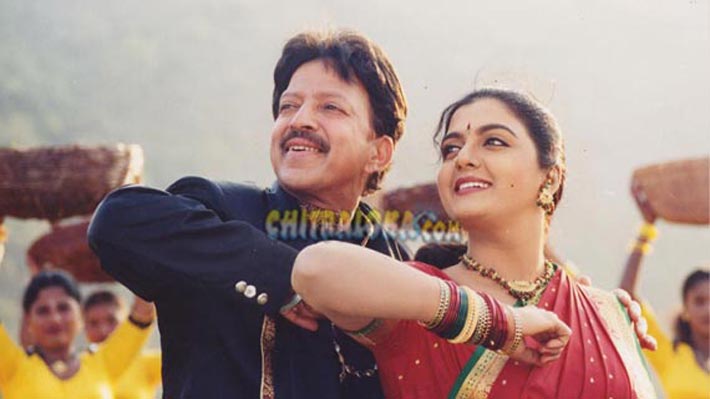 This is a spectacular feast for the fans and family audience of Kannada films. It is worth every penny of your ticket rate. Vishnuvardhan and S.Narayan combination makes a fantastic progress in its fourth venture (Veerappanayana, Sooryavamsha, Jamindaarru and now Simhadriya Simha). There are dozen interesting and lively moments even though this is a remake of Tamil film ‘Nattamai’ and Telugu film ‘Peddha Rayadu’. Congratulations to the entire team of ‘Simhadriya Simha’.  This is an energetic and engaging entertainer. The production values are so rich that the long time admirer of Vishnuvardhan – Vijayakumar has made a lavish film. The moral values upholding speaks of social responsibility.

The Simhadriya Simha family is highly reputed and respected for its values and moralities. The judgment passed by the village chieftain of 48 villages is ultimate and he never misses passing it in right direction. The blood relation does not come in the way. The Gowda (Vishnuvardhan) and his wife Lakshmi (Bhanupriya) in the huge family with the inmates of his brother Chikka (Vishnuvardhan again) and Deepa (Meena) face an uphill task when a charge is leveled against Chikka. Thanks to the come back of Shobaraj after 18 years to avenge the thirst. You find in the flashback the right judgment passed by Narasimha Gowda (Vishnuvardhan yet again) that Shobaraj had been punished and told to vacate the village for 18 years and marry the lady he had raped. Not happy at all with this Shobaraj is waiting for a day. He gets it now when a teacher is inducted to sew venom in the village against Chikka the brother of Gowda. With no second thought Gowda passes the judgment that Chikka should go away from the village for ten years. Soon Shobaraj falls to his own net as the facts are exposed. The Simhadriya Simha Empire remains, as a family without any black spot.

What is interesting you might ask. Director S.Narayan has taken lot of strain in changing the maximum portion of the original. The way in which the triple roles of Vishnuvardhan is conceptualized, the graphic effects, the interest shown in technical brilliance like cinematography, lighting, the costume (Keerthiji you have shown your papa as the most handsome in many scenes of Simhadriya Simha – keep up this wonderful work), the locations, stunts, choreography – all add up to make this a must see film.

Donning a triple role is not that easy. Vishnuvardhan has proved yet again that hard work filled with loads of experience would churn out quality. The Narasimha Gowda role is more frightening when compared to the role of ‘Bettappa’ of ‘Jamindaarru’. The breezy Narasimha’s style and the cool and composed Gowda in addition to lively role of Chikka – only of Vishnuvardhan stature can do.

Meena looks very sweet. The opening song of her is a good entry on screen. Bhanupriya as the up to date housewife Lakshmi is apt. So is Shivaram. Shobaraj deserves special mention for his fearsome performance. The fireball like eyes the tall height of Shobaraj is very punching. The only weak area of the film is comedy of Mukyamantri Chandru.

Deva after the hit of ‘Kotigobba’ has churned out four lovely tunes. When you hear the songs in the audio- tape and then come to theatres to watch the film you feel more interesting. The quality of shooting of songs is beautiful. Pambal Ravi once again keeps the Vishnuji fans in the edge of seats.

Look at these two incidents – The aged parents are sent out by two sons. The daughter comes to the rescue of parents. Simhadriya Simha says a woman comes as mother in three different stages in life. As a mother she nourish the child to become big, as a wife she takes care of every movement and as a daughter she bails out in difficulty. This is really an eye opener. Chikka when his family is about to break says the relationship between husband and wife should be like fish and water and not like fish and fisherman.

Rush to your favorite theatres with your family.