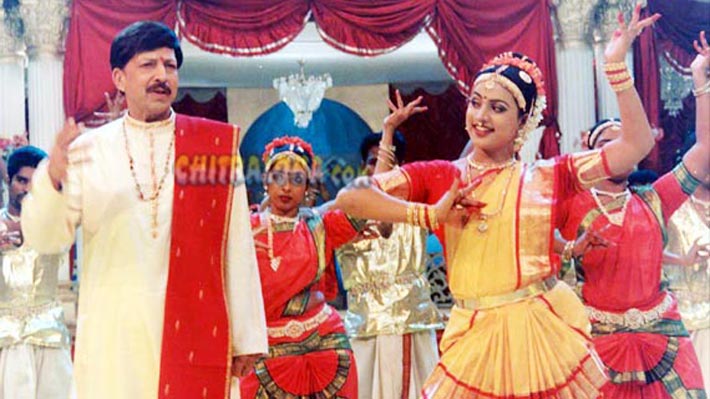 Singing is speech made musical, while dancing is the body made poetic – This aptly suits the much-expected film by stalwart director of Kannada Sunilkumar Desai. In ‘Parva’ he has made music and dance possible with a wafer thin suspense at frequent intervals of his seven plus flash back narration technique. The music and dance in this film is a feast. But there are a few laxities the director could have avoided by not bowing to so many flashbacks. All in all a ‘dekable’ film!

The film begins with a song and dance and ends in a nonstop 13 minutes climax song and dance. Sagar (Vishnuvardhan) is a prolific singer finds Suma in the midst of the crowd and makes frantic effort to search her. His co dancers and singers get to know why he is behind Suma and this is the beginning of the rain of flash back. He has a father an exponent in Bharathanatyam. Sagar is a disenchanted youngster, a boozer with quarter bottle in his pockets on account of tragedy he suffered. Sagar describe how he reached to the spot because of Suma (Prema) who had come to learn Bharathanatyam with her father. In front of Suma now the drunkard Sagar describe why he reached this spot and it is the second flash back. He had been ditched by Sudha (which he presumes) and in a fit of anger in front of his drums he weeps in sorrow and he loses his mother and thus given up singing. Suma urges Sagar to take back to singing and he returns to his musical family on the insistence of Suma and all set to give his come back program but demands Suma’s presence. Even after promise Suma is not able to come and she has a special seat. The search for Suma goes on for one year. Finally Suma is set a deadline by Sagar through a television program. Suma reaches the place of Sagar and there begins a flash back that describe Suma’s past. There enters Bhattacharya a well known singer. Bhattacharya and Suma’s father (played by Dattatreya) have picked up a flash because Bhattacharya’s father insisted on his daughter winning the competition and force him to go for a popular raga. This irritates Suma’s father and he goes away from the huge hall in fit of anger and also dies soon in the car accident. At this juncture Suma comes to Sagar’s place. For the come back of Sagar’s program Bhattacharya had forced Suma not to be there, as this would harm the growth of his daughter. The powerful Bhattacharya cancel Sagar’s first come back program (we are in the flash back to remind you) but Suma begs not to stop it with Bhattacharya. In return Bhattacharya demands from Suma that she should not dance till he says. Suma agrees in the interest of Sagar and so she is keeping away from Sagar’s program since one year.

Now it is the time for Sudha to explain her flash back to Rekha. An industrialist she declined to marry him had ditched Sudha and so she is settling down in a dance school forgetting the past. She is narrating all this in a flash back to Rekha. Rekha on the other hand inform that Sagar had loved her and both of them come to Sagar.

What happens later is a clash between Sagar and Bhattacharya. It is a musical clash and the winner would win the honor of highest esteem. There begins the first ever climax song of 13 minutes begins. Sudha is in the Bhattacharya gang and it is time for Sagar and Bhattacharya to sing one after the other and show their potentiality. Bhattacharya loses in his ‘Swara’ rendering and Sagar receives the tumultuous welcome. Suma also on the spot comes for a competition in Bharathanatyam opposite Bhattacharya’s daughter and wins.

It is a chilling performance from Vishnuvardhan. The one scene where Vishnuvardhan in front of his musical instruments room at the time of his mother’s death is mind- boggling performance. The fans of Vishnuvardhan need not bother because there are no fights for their ‘Guru’. There is splendid action filled performance from him. The costume of Vishnuvardhan is once again excellent. The dancing ability of Prema deserved to be better. Roja looks very charming and good in her portion too. Shambu Hegde the Yakshagana exponent has done Yakshagana without make up whenever he comes on the screen. Radha Ravi fits the bill.

Hamsalekhaji although you have been inspired from various Hindi films like Taal, Hum Dil De Chuke Sanam and Hum Kisi Se Kum Nanin, the tunes are refreshing to Kannada audience. This is a pure filter copy. We expected from you the modern days ‘Shankarabharanam’. You could have given room for more classical songs instead of damama sounds that disturbs our ear -drums.

Cameraman Venu has done a competent job. With nearly 150 persons in front of Camera it is quite a difficult job Venu made it easy. The picturesque locales of Chickmagalur the water falls the mountains the sets are feast to watch through Venu’s camera work.

This is a film little lengthy but all the way worth watching.