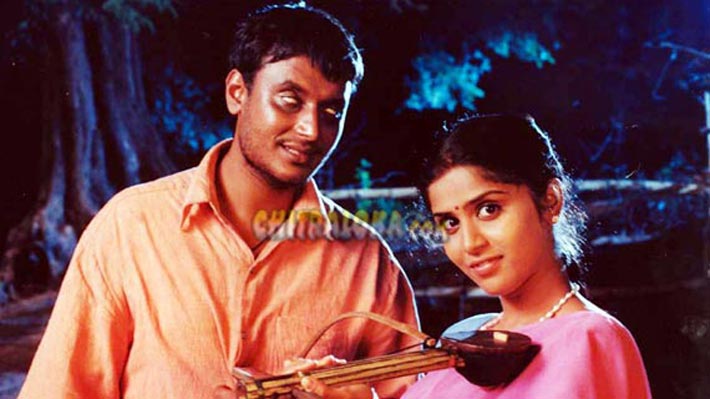 This is a must see film. This is a picture perfect we don’t say. The duo directors are so raw that they have just copied the ‘Kashi’ Tamil (this was copied from Malayam film Vasanthi Lakshmi….)  film. Settling scores of the characters they have built in the 14 reels of the film they have forgot to put an end. But why this is a must film – we have Ramu – Darshan doing his career best performance. We would like to get up from the seat and help this hapless youth who struggles so much with a major handicap of blindness.

For all handicap people the God has given a good sixth sense. We believe it. But it is true in the case of Ramu the blind protagonist in the film. He is a prolific singer, poet, could match his poems to perfect ragas, he finds his own livelihood besides supporting family of four, he recognizes everything from just one meeting and above all he is a too good human being. When such a person is seen on screen with bundles of troubles we think sometime to get up and help him.

Ramu’s ardent sister (Hamsavijetha) and lovely girl friend (Navya) the adorable mother and always frightening father and brother and the unforgettable companion Doddanna form the key cast in the film and when it comes to performance it is only Ramu and his sister role played Hamsavijetha (grand daughter of veteran actor late Udayakuamr) share top honors. There is a cunning Patela in the village and his friend who comes from Delhi are anxious to fill their hunger of sex. So the dumb Navya and Hamsavijetha become target for a plot hatched by Patel the chieftain of the village. This is all at the insistence of getting back the vision for Ramu and the downtrodden in the society go still cheaper in their social life. But the innocent Ramu gets the clue from his sister before her suicide. In the charged up melodrama with his sister laying dead. Patela faces the wrath from Ramu with onlookers stunned. Ramu goes walking down telling his mother that getting vision does not serve his purpose anymore. He does not want to see this big bad world.

It is Darshan all the way. He takes control of the whole film and he is near to perfection. The shaking of his head, the eye balls looking completely that of  a blind, rubbing his finger on the neck his crying the make up maintained for him throughout the film have come out naturally. Hamsavijetha is notable for her pensive performance. Navya has also lend good support and so is Doddanna. Umasri is vociferous. The new find Hanumanthe Gowda gives a stylish performance and he leaves a strong impression. Dr.Ratan playing his role for the first time is quite convincing.

Meastro Ialayaraja and cameraman Ramesh Babu further boost up the quality of the film. The song written by Rame Gowda and Kalyan are very meaningful.