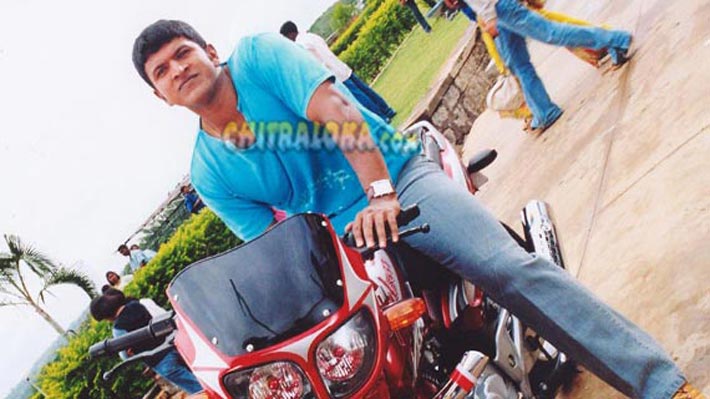 MOURYA – is a man of steel and heart of butter. The film could be immaculately categorized into these two categories. When it comes to action, stunts and thrills our hero is a man of steel. When it comes to sentiments of mother, father, step mother and sister he is a heart of butter. In his anger there is concern. That is the beauty of this character.

Compared to earlier three films of Puneeth Rajkumar this one is brisk, gripping and intelligently made even though the film is a remake of Telugu blockbuster ‘Amma Naanna Oh Tamil Ammayyi’. There is some exotic location, fine comedy and cozy atmosphere for family audience.

The way in which the first half is divided for mother and second half for father with the protagonist staying in both the places is captivatingly narrated.

Fond son of his mother Manu (Puneeth Rajkumar) does not want to see any shortfalls in the life of his mother. They tease, cajole, lives like friends. But destiny is too crude. The mother is snatched away from son. But before the death she takes oath from her son that he should learn kick boxing from his (Manu) father. But he is always under the impression that his father is a bad guy. Back in Shimoga after his mother death Manu joins his father with lot of discontentment. The going is tough in the beginning but slowly the same rough and tough approach melts down when he meets his step mother and sister (born to second wife of his father). When it comes to the kick boxing issue he falls to the feet of the one who has entered in the life of his sister. Beaten black and blue in the championship Manu begs for his sister secured life with his opponent. He even gives up his championship. What happens in the nick of time? Watch this film yaar!

Puneeth excel in electrifying stunts. The acrobatics he has done and the graphics made use in some cases are surely going to be hit. He is so fast and cool on the screen. Aaqir beta kiski hai!

The best portion has come from Devraj. Probably this kind of roles we expect from Devraj as the age is catching up for him. Roja is apt. The national award winning actress Meera Jasmin is a lollypop addition to the film. The only disadvantage with her is her height. Otherwise she is excellent. As a chicken hearted girl, a cigarette smoking girl she is so natural. The comedy department of Komalkumar and Doddanna is well conceived.

P.K.H.Das has captured whatever that is pleasant at the shooting spots. The Joge Falls the wonder of this country is a treat to watch in his camera.

The film is not free from shortfalls. The main bottleneck is array of fights. Two could have been avoided. The present generation treatment is there but the frequent fights are not up to today’s demand.

This is an above average film.