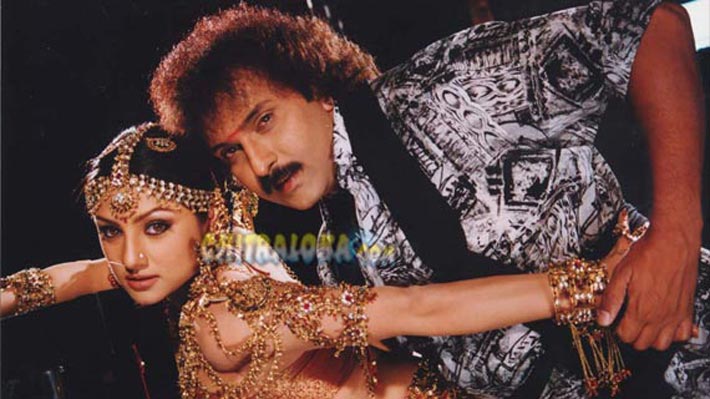 The dream merchant of Kannada cinema Ravichandran’s highly expected cinema ‘Malla’ is a splendid package. The first half is ‘romantic special’ the second half is ‘action special’. Instead of such a lengthy ‘Kannadi fight’ (also partly Kerala martial arts) it could have been brought out in a different brainy style. Had this modification done the expenditure, time and audience head ache could have been avoided to some extent. Ravichandran applies two tricky ideas in ending two of the four brothers. A little bit of exercise to give an intelligent touch to finish was needed.

Other wise the film is a technical treat. The standard set by Ravichandran is in no way less when compared to Hindi films. The voice of Vishnuvardhana makes us to prepare for the film and this is a welcome attempt. The romantic scenes between Ravichandran and Priyanka were a booing moment for the audience in the theatre. Perhaps in any of the earlier Ravichandran films such intimate and invigorating scenes are not seen. Romance crosses the limits at places. The dialogues are bookish at times and the rhythm touch given for dialogues and songs there is not much of difference. Is it the other way to give poetic justice?

When we look at why ‘Malla’ is ‘Bella’ there are many interesting and intriguing portions. The style of film making is good. The narration technique is above average, the grandeur in the film is not missing and it is like in any other Ravichandran film. Uphill task of Ravichandran is seen in each and every frame. Cameraman Seetharam gives visual treat throughout the film. This is flowery treat too.

Here is a brief story line – Mallikarjuna alias “Malla” is the most wanted Samaritan. His approach in life is as soft as a flower. The lorry loads of flowers used in the film gives extra dimension to the film to his delectable intentions. His son Shiva (Ravichandran again) is a poison. He is brought up like that by tormentors.  The father and son on screen are like ‘God’ and ‘Gory’. One is a fine ruler and another one is a destroyer. Why they are like this? You have to watch this gripping film. But the destroyer Ravichandran becomes a protector. This is of course after knowing the truth.

Malla Ravichandran is like a ‘Gulab Jamoon’. He really looks so sweet. The other Ravichandran - Shiva with spread hair is a ‘dry Jamoon’ to be precise. The romantic professor on screen Ravichandran looked at him in another angle too in the film. But the ‘lovely Ravichandran’ only remains in the memory. Mohan as the lieutenant of Malla gives an able support.

This is a sensational film for Priyanka. She looks gorgeous. The sensuous scenes between Priyanka and Ravichandran could be a crowd puller. Rest of the artistes are just average including Umasri.

‘Malla’ is a ‘March’ month special coming to the theatres in the fag end of February.

Nimma Kasiganthu mosavilla. March to the theatres where ‘Malla’ is showing.