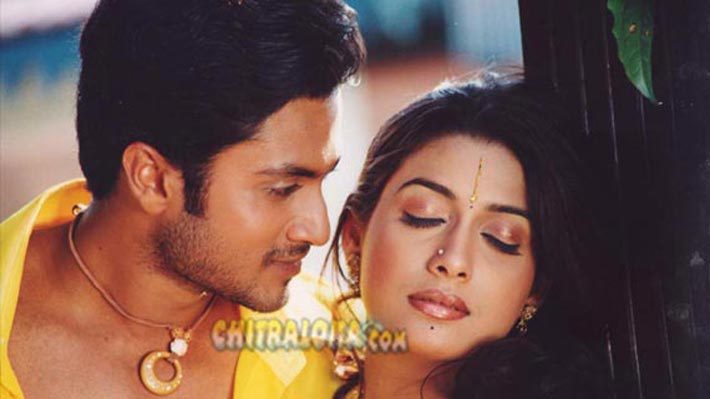 You want to have a travelogue to Varanasi, Dubai and exotic locations - you want exhilarating stunts and chase of Jolly Bastin – you want to see the handsome looking hero Audhtiya and bubbling Rakshita – finally you want to have a feast to your eyes – WATCH LOVE.

Reputed director S.V.Rajendra Singh Babu is an overwhelming personality. This anxious and ambitious director in an attempt to focus his handsome looking son Audhitya – the third generation of artiste from his family he has forgot to do a proper screen test for his son. Audhitya has some laxities – while delivering dialogues, dancing and giving close up expressions he deserved to be better.

When a top director like SVR Singh Babu takes up a subject and goes on to make a film with his son it seems he has forgot to properly display the qualities of his son. ‘Hettavarige Heggana Muddu’ – it may be. But why the audience tolerate the minus points.

Yet another striking mistake in Singh Babu’s direction is his consumption of time to give a final verdict. Besides this he has shown the Dubai police in bad taste. When there is a title like ‘Love’ the audience mind is set already. Today’s audience are brilliant than the directors. Like how thieves are intelligent than police. Because a director in Kannada does not see all Kannada films but an audience sees all films irrespective of language the cropping of problems and similarities is more. Those who have seen ‘Kanti’ in the morning and then ‘Love’ in the afternoon would notice some similarities in both the films.

The major bottleneck of this ‘Love’ is that of music. Anu Malik has not done anything great. By singing a song Love ge…., he has tested the patience of the viewers like how the director Babu tests the patience with his length in the movie.

The ‘Love’ between the boy and the girl starts and finalize at the banks of Ganga River. Between these many reels pass. On precious secret the hero loses the faith of his lover. This leads to a bad patch of the hero for sometime. But when Mohan Nair (Mohan Lal) advice the hero to explain the fact he opens up the secret. His lover later joins him but between this there is some struggle for both. The rabble rouser Saligrama Oberoi (Amrish Puri) finally gives up his cunningness. All is well that ends in love.

Rakshita dubbing her voice for this film has added one more distinction to her status. She looks very fat especially after the Dubai chase. Eat less and work more should be her principles in life as on date.

Mohanlal debut in Kannada is not quite convincing. He is a marvelous actor and his potentiality is not tapped properly. Amrish Puri is in the same role of his of over 100 bad man Mogambo roles.

Audhitya you have long way to go. There may be a talk that you are Hrithik Roshan of Kannada. But we don’t agree that Hrithik Roshan is a good actor. You got the point.