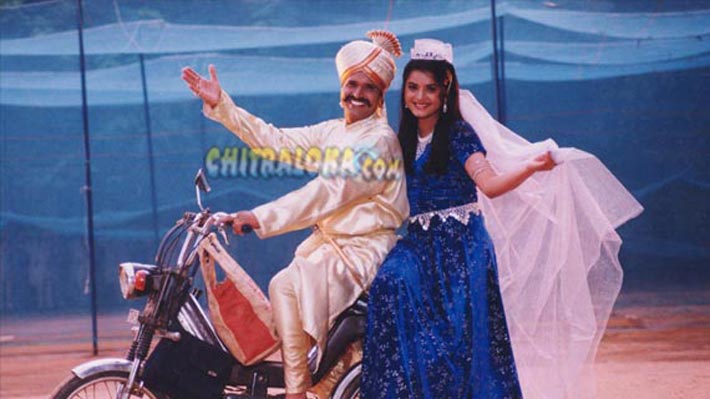 With a pretty good position in a long career of direction S.V.Rajendra Singh has done plagiarism to perfection. Picking from English comedy kings such as Charlie Chaplin, Laurel and Hardy he has adapted it with the current popular stars. We do not call this as a remake but as there is a real change for the audience. It is a basket of comedy and jokes. Forget the logic here also like in earlier KSK (Kurigalu Saar Kurigalu). The scenes and songs in the film run like an intoxicated horse runs on a free ground.

Ramesh, S.Narayan and Mohan with counterpart spouses Urvashi, Prema and Thara are dejected in life. Their earning is not supporting the family in this high- class society.   After a futile bid to end their lives they encounter a business in a similar situation and bail out him with their ideas to improve the business. They get a pretty good salary. When the daughters of businessman Mukyamantri Chandru decide to come to India the real problem opens up. The three girls are for love marriage and the father wants to prove it is a fake. He wants his relative sons to get married to his daughters. The employee youths Ramesh, Narayan and Mohan are given the task of loving his daughters and later ditch them so that the daughters agree to father’s terms. The trio married fall in love with fresh trios from USA. In the process they get involved in many comedy situations.  The funniest part is that when the married trios get caught with their wives through the common maidservant of their houses.  The money at the disposal of married trio makes their mind to go haphazard. They really start loving the girls but sentiments help in resolving the crisis of the businessman.

It is a two and half an hour laugh riot from frame one in KSK2. Ramesh, Urvashi, S.Narayan, Umasri have done commendable job. The one particular scene where Umasri comes as a ghost and frightens the trio is the best scene. The same Umasri has got another horrible scene that could have been avoided. Perhaps, director Babu could have avoided lot of noise.

None of the tunes of Hamsalekha is worth hearing again. B.R.lakshman Rao’s Baare Rajakumari… song rewritten to suit the film media is not in good taste. Is this an example of money bringing down morality?  Richard Louis has lived up to the expectations in his dialogue department.