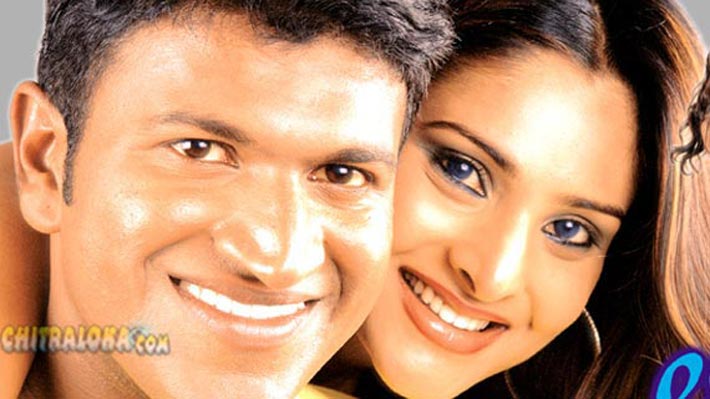 The much -expected ‘ABHI’ besides being an exhilarating experience for the viewers adds a new dimension for a love story film. When things does not work out in favor of the lovers what should they do instead of giving loads of sorrow for their parents? ABHI has an answer and it is convincing. Based on a real life story the director Baboo and his team have given quite a convincing film.

Minus the bloodshed – wherein the young couple (with a child looking) are slashed brutally the film is worth watching. This particular scene of violence could have been shown from the point of view of ABHI (like how it is shown when Abhi visualizes) without enacting it and making it look gory.

There are half dozen of wonderful elements that draws people to the theatre. Yet compared to APPU, ABHI is little less in music department. All other departments contribute very well. Among all cheers for acting! Puneet, Satyajit, Sowcar Janaki, Raju Ananthaswamy share top honors. Sumitra and Ramya have rendered able support.

A straightforward, cool as cucumber Abhi is not like a usual boy in the College campus. He is a wonder boy, buxom and gutsy. That’s really what we would like to see a hero you would think and like that he is on the screen. Abhi is a natural, nonpartisan, nimble and noble in the end. He cannot see sin happening or his closets get hurt. Such a strong person has butter like heart. For Abhi mother is everything. He celebrates Mother’s Day instead of valentine day or friendship day in his college.  You guys in the campus please take a note of this!

Such a young boy aspires for his lover Bhanu in his life. There opens a flashback that is what has happened in real life a few months ago. Abhi on knowing those who have given birth to him loves his mother who had given him 20 beautiful years. When his mother says that history should not be repeated and she cannot resist it Abhi works out a plan. Abhi’s mother (on the wheel chair played by Sumitra) informing that 20 long years of care going away in two months of love touches not only Abhi but all others who are watching this film. This particular incident and Abhi taking his mother to the temple to announce that ‘Ninna Kannire Nanna Preethige Uttaravadre antha Preethi nanage Beda Amma’ – this has to be kept in mind by each and every youngster and that special message has come from the biggest family of film making – that is Dr.Rajkumar house. Oh what a nice statement indeed.

Abhi is thinking on keeping his mother free from tension. In Hubli Bhanu has also given Vadha to her Abbajan not to further move in her love. She has written a letter in the house on her good aspirations and come to see Abhi for the last time in her life. The wrong calculations of Bhanu’s father breaks out a mayhem and the man with courage Abhi gives a fitting answer. But the elderly person Bhanu’s father falls immensely flat. So the same elders who dug sorrow for the lovers unite Abhi and Bhanu.

Puneet has lovely screen presence. His dialogue, emotions and fights are a treat to watch. He has improved in his diction considerably from his earlier film. Whenever Puneet comes in front of his mother it shows that this should be attachment of mother and son in each and every family. The mother’s day celebration reminds ‘Kuch Kuch Hota Hain’. But this has been completely rehashed and looks refreshing and appealing. Ramya leaves a strong impression and she is the right choice. Interested to continue Ramya has a good journey to travel in tinsel town.

Satyajit and Raju Ananthaswamy are the two with Umasri and Sowcar Janaki reached the perfection. Raju Ananthaswamy you can sing also in the midst of your acting and that reminds of your ‘Paapa’. Music overtakes the lyrics in some of the songs. Gurukiran gives three lovely tunes. Once again the action is splendid. Ram Shetty and Palaniraj have done wonderful stunts and Puneet doing it self is also spectacular. The song sung by Dr.Rajkumar Vidhi Baraha Entha Gora….., holds a mirror for the entire film.

The redeeming feature of this film is the mixture. A right film at the right time from equally right banner!