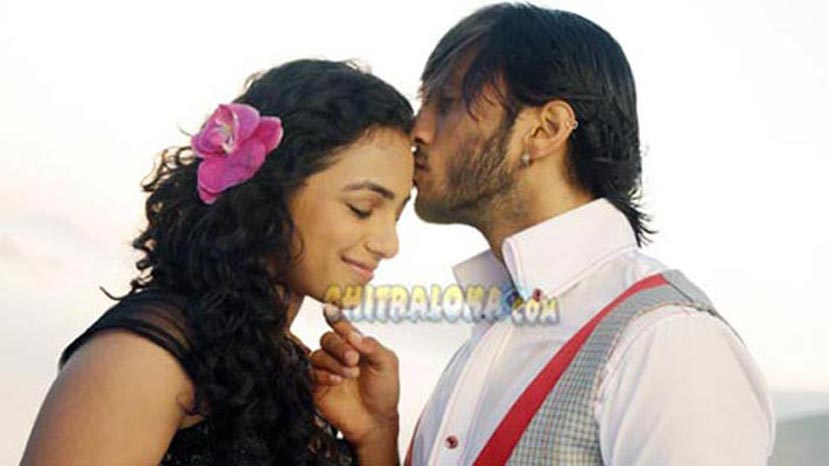 Nagashekha directed "Mynaa' produced by Raaj Kumar is a love story narrated in a different manner.  The film has thrilling elements coupled with someday an seat edge narration.  Mynaa is certainly the best product to come out from Nagashekhar (his earlier two films "Aramane and "Sanju Weds Geetha were also hits. ' stable.

The film starts off as a thriller when the Home Minister looks at the dead body if gush biter wig has been murdered by one person called Sathya. Then the film takes up several shapes with Sathya and his ardent lover Mynaa sharing their great moment of loe.

Sathya escapes from Police custody to be with Mynaa. But finally the Police bullets takes their lie away.

Sathya Hegde's camera work is outstanding. Jessie Gift's music composition and Sadhu Kokila's background score work is another high point of the film. Dances are well choreographed. Technical values are perfect. Producer  Rajakumar has not spared any efforts to make the film rich in production values. The film's first thirty minutes will.

Chethan as a performer has improved in leaps and bounds. His efforts to dub in his own voice is commendable. Nithya Menon' expressions-particularly her smile will bowled You. Action Choreographer Ravi Varma and Suman Ranganath have carried their roles with ease.  Among the other artists, Arun Sagar as a Home Minister and Ajay as his doctor have been impressive. Anant Nag, Suhasini Manirathnam have crafted their roles well.  Sadhu and Bullet Prakash have done comedy roles perfectly.

Mynaa is a film that may be considered as  a classic   by a few audience, but a well narrated love story for others.