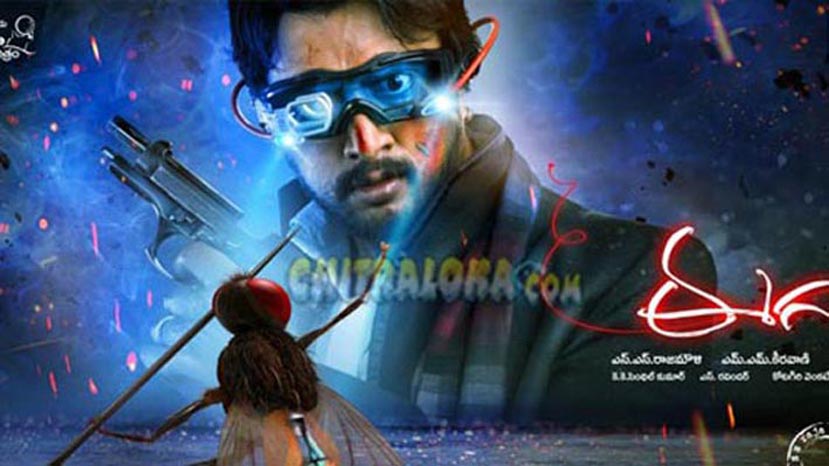 For the first time chitraloka is giving a review of Telugu film since our Sudeep is acting in Eega film. Chitraloka always support Kannada films.

It is too well known for Kannada film audience that Kicha Sudeepa is a prince of performance in the industry.   He is certainly one of the topline artists of the country was the opinion of many of people who had watched his films regularly.  But that fact of matter did not reach out to the Indian film industry in general and even the South Indian film industry in particular.   S.S.Rajamouli  directed Eega once again reinforces the belief that Sudeep is a maginificient actor.

Sudeep shows wife  range of emotions that is seldom recorded on screen by any Indian actor in the Villain's role in Eega.  It is to his credit that he has been able to master the craft of delivering  strong performances on screen.  Eega is one such film which  is sure to showcase his wide ranging talents to the entire world and we Kannadigas have to be proud that  a director from outside the state has been able to get the tunes right from a superb actor like Sudeep.  It is a fact that  Rajamouli is a superb craftsman, but what makes Eega particularly enjoyable is Sudeep's  performance which is the top of the ladder and higher than the  superb technical elements of the film.

Sudeep as an actor  pushes the boundaries of the acting craft in this film like never before.  As many Kannada film fans will agree, this time he is sure to draw the attention of  top critics, juries through his focused performance.   Sudeep rocks in the film Eega can not fully justify his contribution to the film.  This may well be  too much a lighter and underestimated statement.

Nani, Samantha, Ramesh and all others have done very well. Senthil's camera work and Keervani's music composition and background music adds thousands of light to brighten up Eega.  .More than anything else the film has Rajamouli's creative talent and Sudeep's magnificient performance.

Eega is excellent.   Watch it along with Romeo to have a good time.