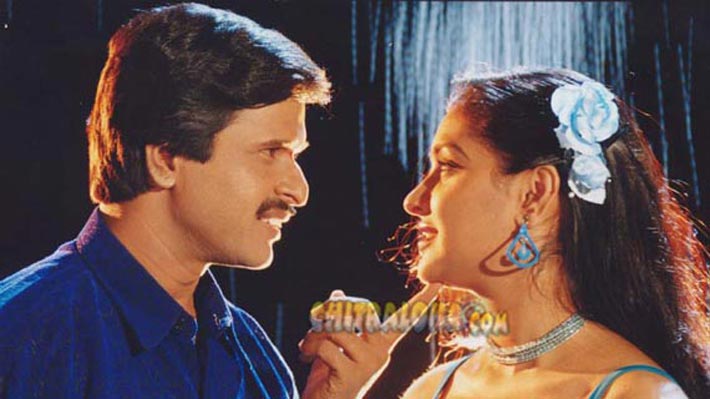 Anjali is amazing. Geethanjali is gleeful. S.Narayan is ever nimble. From ‘Chaitradaha Premanjali’ eleven years ago to ‘Anjali Geethanjali’ this multifaceted Narayan has been consistent, confident, compatible and competent. His urge to be different since he became a full-fledged actor is widely appreciated as he gives thought to his work strongly at his home.

Once again ‘AG’ he has worked hard with a quadrangular love story. He is pitted against three charming girls of a single family. As a wild life photographer he clicks the beautiful girls photographs than the wild life animals. As Sagar (S.Narayan) enters the arena of a family he takes a liking to a dumb Geethanjali.

Sagar a stranger in the highly respected family is mistook by Anjali as he is under false presumptions of love. Anjali is a cantankerous girl and she is not prepared to lose her love for her elder sister. There is one more daughter of the house who is pretty good looking is waiting to express her intentions. Prior to the post interval you find that Geethanjali (Prema) is dumb as well as widow.

On the other hand Anjali tries hard to retain her position. A thought provoking speech by the hero Sagar opens up her mind. Finding nothing is moving in his direction the hero walks out off the house. To keep you guessing we are not telling the climax. Who joins the hero sagar and how?

The last thirty minutes of the film is very captivating with sudden turn of events. It is not that in the remaining time it is boring. Director S.Narayan has that ‘Chanakya’ mind in making every reel very interesting. There is comedy, double meaning situations, lovely photography, bad back ground music, lilting tunes, excellent production values, and of course the stunts.

Director Narayan could have avoided the opening fight. He could have also trimmed down the film by another half an hour. Should have been more cautious in the technical side as the music and situations does not synchronize. It is also in the case of a song between himself and Prema. The lyrics won’t match to the situation.

This is the last film of late Direndra Gopal and his usual punch and presence is missing. Director paying tribute in the middle of the film, that this is the last shot the actor participated is a good thought.

In the acting department talented actress Prema is wasted. She really looks charming. Anu Prabhakar has once again proved that she can take up any role and perform it better too. S.Narayan shines not only in comedy department but also in emotion filled sequences. In this film he has the nerves to bash up goondas. Veteran Ashwath has remained what he is in real life with no extra effort.

Prashanthraj’s two tunes are worth remembering. The high point of the film is photography.

The viewing does not harm you. The story line also rakes up memory of earlier days.

Don’t hesitate or delay to watch this film.