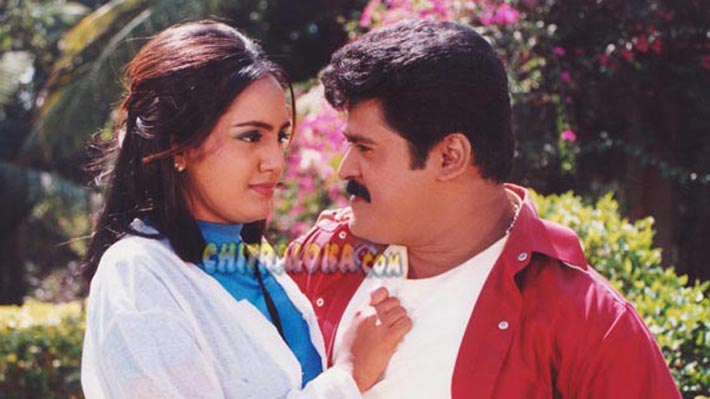 This is an above average film with very good twists and turns in the post interval. Jaggesh has given better comedy in his earlier films. He has concentrated on the solid story in this film. The second half opens up with a secret and before this you have the comedy king Jaggesh and Doddanna to treat you with comedy scenes.

The war of words and countering between the two and finally throwing a challenge that the good fortune –Shukradeshe is not that easy to achieve by Doddanna and how it could be changed shows the Jaggesh tricks. There is some tug of war between Doddanna and Jaggesh but what for it is hided makes the audience to watch curiously by the directors Vimal and Kadhir.

Guru (jaggesh) and his friends are running a canteen opposite a five star hotel owned by Doddanna. The rot coming out is a disturbance to the big (in size too) businessman Doddanna. So the hero is not worried. He throws a challenge when a bid to evacuate his canteen is attempted. Next on winning the heart of his daughter (?) Guru also warns Doddanna to dilute his properties and tells him the good fortune for him (Doddanna) has come to an end. In a few funny sequences Guru grabs the affluence by handing over the properties to Income Tax and then coming in disguise as a diamond merchant causes troubles.

As the ‘maa’ of Jaggesh enters and (she even recoup from paralytic stroke in that sequence) as she sense the danger to her son, the flash back narrate that what actually is Doddanna is all about. In the past in a property issue Doddanna had played the good Samaritan role. Doddanna and his brother looking after the huge property of father of Jaggesh enters into a battle when Jaggesh father gives the power of attorney on his six months vacation.

To grab the entire property Doddanna’s brother makes a futile bid that does not work out. In the meantime the little Guru and her mother are missing. Doddanna fails in his attempt to trace the hapless wife and child of his boss. It is this property that actually belongs to Jaggesh, Doddanna is enjoying (This twist is very good) but of course maintaining it in an order. As Doddanna traces the spouse of his boss now with Guru as the leading man automatically the transfer of property changes hand to Guru.

Although this Shukradeshe starts for Guru he has wrong elements like his fiancée and their father gang on toes to take revenge as one of them is the elder brother of Doddanna who exercised foul means to achieve his ends in the past. A revenge saga is well avenged by Guru and the heroine Geetha also returns back to his arms after knowing what she is doing is wrong.

Jaggesh mouthing the dialogue in his super fast express style also looks neat with wonderful costumes. Doddanna the hill-man of Kannada cinema is routine. Srilakshmi is tender in her looks and danced with ease. She has got a long way to go. There is not much of work for the remaining cast. Jaggesh’s brother in a short role looks handsome.

The location of five star hotel area looks similar to a foreign location.

Vijayanand music overtakes the lyric portion. Is it the sound effect problem in the theatre? Photography by Srinivas is also pleasant.

There is a wide change from earlier Jaggesh films to this film. Has the good fortune (Shukradeshe) has begun for Jaggesh?